General Hospital (GH) Spoilers: Ava and Paul Go To War With Corinthos Crime Family While Sonny’s Out of Commission 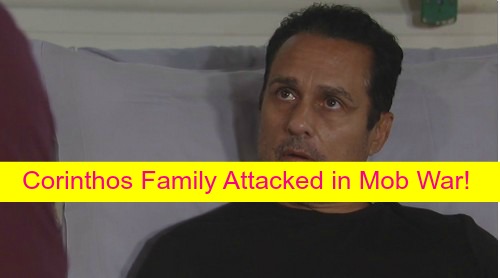 We just saw Sonny get a major medical slap down – this “General Hospital” (GH) spoilers takes a look at what will happen while the Teflon Don recuperates and tries to get back on his feet.

It was painful to watch Sonny Corinthos (Maurice Benard) stubbornly try to stand only to crumple to the hospital floor. Sonny was so certain that his willpower alone could get him out of that chair but obviously, that won’t happen. Sonny had to acknowledge his weakness and this will be a red flag waving at rival mob families, daring them to come and take what’s his.

Once news reaches the eager ears of Paul Hornby (Richard Burgi), he’ll be inspired to make a move. And with all the minions Paul seems to have all over Port Charles, it won’t be long before he knows just how weak Sonny is right now. Paul will go to Ave Jerome (Maura West) and develop a plan to make a move on the Corinthos syndicate, take over territory, and maybe even take out their men.

Sonny flat out told Michael Quartermaine (Chad Duell) and Morgan Corinthos (Bryan Craig) to stay out of his business. And isn’t “stay out of my business” such a mob cliché? Anyway, Sonny ordered his sons to back off and said Max Giambetti (Derk Cheetwood) was going to run the business for him. That’s all well and good (in theory), but Max is no Duke Lavery (Ian Buchanan) or Jason Morgan (Billy Miller).

Max will not be savvy enough to fight off a mob attack from the Jeromes. Let’s face it, Max lacks that killer instinct. He’s a big teddy bear on the inside. Instead, look for Michael to step up, despite his father’s protestations, and take over the Corinthos syndicate to protect the family. Morgan will insist on stepping up as well and we’ll have a whole Godfather-esque storyline play out.

It will be like when Vito Corleone got all old and weak and Michael Corleone and Sonny Corleone took over the family biz (although that didn’t work out well for Sonny Corleone – and let’s hope Morgan isn’t the Corinthos family’s version of Fredo). Sonny will not like to hear that his boys are in the biz so Max and the boys may keep it quiet as long as they can so they don’t put Sonny’s recovery at risk.

The bottom line is that when Paul and Ava make their move on the Corinthos clan, they won’t find the cartel as weak as they expected. What we will see is that Ava and Paul’s business (and perhaps personal) relationship coalesces as they perceive vulnerability in the Corinthos organization. Ava will want to make the move to crush Sonny utterly in revenge for keeping her daughter away from her.

Michael may also have Jason on his side as well – the ‘Jake is Jason’ reveal is coming soon – and even without it, Jake is a force to be reckoned with who feels protective towards Michael. Billy Miller is taking a break from GH at the end of the year (and may not come back if his role on the new FOX Urban Cowboy TV show turns into a permanent gig), so let’s hope the mob action goes down before then.

The bottom line is that Ava and Paul will act on a bad assumption that the Corinthos organization is vulnerable without Sonny. The Jeromes may get off one salvo against the rival cartel, but once Michael knows there’s trouble, he will step up in a big way to defend the family business – and the family – against evil Ava and her secret mob pal Paul.

More on this as the plot thickens! Don’t miss a moment of GH then head back to CDL for more “General Hospital” spoilers, gossip and more.