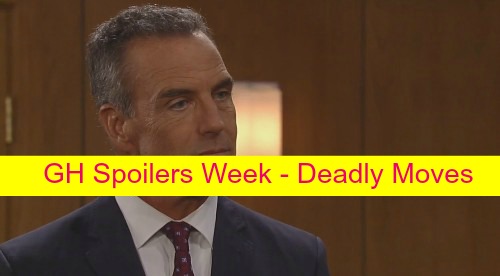 Check out these juicy “General Hospital” (GH) weekly spoilers for the Monday, October 26 through Friday, October 30 episodes of the hit ABC soap. Major events occur next week in Port Charles that you do not want to miss.

The Corinthos Clan Get Good News and Bad News: Now that Carly Corinthos (Laura Wright) and Sonny Corinthos (Maurice Benard) know Michael Quartermaine (Chad Duell) is making them grandparents, how will they react? They take the news well.

Sonny wants Michael to marry Sabrina Santiago (Teresa Castillo) and tells him to get busy proposing. Michael won’t protest too much since he does love her and wants to make his ailing dad happy. How long til Michael puts a ring on it and will Sabrina say no because of her lies?

Carly is happy to have more people in the family – both Sabrina and the baby – but Sabrina is feeling sick about not speaking up about her shagging Carlos Rivera (Jeffrey Vincent Parise) before he ran off and died. How far will Sabrina take the lie?

Also, Carly gets hold of some major information this week. Is it news about Jake Doe’s (Billy Miller) identity? And what kind of bachelor party is Carly planning? Ric Lansing (Rick Hearst) stops by to give Sonny some bad news on the legal front. Is it about baby Avery?

More from Jake and Liz, Sam and Spinelli: Liz Webber (Rebecca Herbst) is making last-minute wedding preparations even though she still feels some trepidation about her lies to Jake, Liz is reassured when she see Jake being a good dad to her three boys by taking them Trick or Treating.

Audrey Hardy (Rachel Ames) comes to town for the wedding and has a sweet gift for Liz’s big day. Sam Morgan (Kelly Monaco) has to call in Diane Miller (Carolyn Hennesy) to get Damien Spinelli (Bradford Anderson) out of jail.

Diane is not happy that Sam got Damien to do some hacking that got him arrested. Good news is, Diane gets The Jackal sprung from the PCPD and she hopes he’ll go on the straight and narrow. Spinelli will not. He tells Sam he’s more determined than ever to get to the bottom of Jake’s identity crisis.

Sam lets Jake know that she and Spinelli are still hard at work on cracking the case of who he is but Jake himself may break the case wide open when he tells Spinelli something critical.

Is the big clue that little Jake Spencer (James Nigbor) told big Jake that he’s really his dad? Does that send Spinelli looking back at General Hospital records to see if little Jake was DNA tested? Nikolas Cassadine (Tyler Christopher) is not happy about the lengths Sam and Jake have gone to – including breaking into his house repeated times.

Will Sam apologize or get back in Nik’s face and tell him to come clean? Hayden Barnes (Rebecca Budig) gets a plus one for Jake and Liz’s wedding. That can’t be good.

Only Dante won’t do it because he knows Dillon wants the truth out so he can try and swoop in and steal Lulu and Dante can’t see reason. Instead of coming clean, Dante heads to Lulu’s OB/GYN with her to talk about the implantation. They get some news from the doctor that makes things more urgent.

Olivia Falconeri (Lisa LoCicero) tells Dante what a wonderful son he is and this makes Dante feel even more like a jerk – which he is. Dillon grows increasingly frustrated with Dante’s refusal to tell Lulu the truth and he thinks about telling Lulu himself, even though she may hate him for revealing the bad news about her hubby. Dante sees Lulu and Valerie having a bonding moment and this makes him feel just sick about shagging Lulu’s cousin.

Dante goes to dad Sonny to tell him that he was unfaithful to Valerie – remember before he had only confessed to kissing Lulu’s cousin after assuming that Lulu was cheating with Dillon. Lulu meanwhile has no idea all this is swirling as she makes final plans for the Haunted Star Halloween bash.

The party will be a fund raiser for Dillon’s movie and this means some of the film footage will play – including the confessional behind-the-scenes shots of Valerie saying she slept with Dante!

Miscellaneous Mobster Updates: Ava Jerome (Maura West) needs Kiki Jerome’s (Hayley Erin) help in her custody battle with Sonny over baby Avery. Kiki, though, doesn’t want to be around her mother at all. Kiki may also think that Avery is better off without Ava.

Ava will be shocked to find out that Kiki has new surrogate parents in Franco (Roger Howarth) and Nina Clay (Michelle Stafford). Ava will also share a special moment with Paul Hornsby (Richard Burgi). Will Paul offer her comfort or more threats? Sparks fly between them!

Paul has some advice for Dillon about Lulu. Will Paul tell him to go for it or will he caution about breaking up a marriage? Paul might want Dante broken-hearted to further complicate Sonny’s life since Paul is planning a big move against the Corinthos cartel.

Paul tells Anna Devane (Finola Hughes) that he knows something about her. Does he reveal that he knows she killed Carlos? Molly Lansing (Haley Pullos) thinks Julian Jerome (William deVry) is hiding mob dealings from her mom Alexis Davis (Nancy Lee Grahn).

All this and more on next week’s GH. Don’t miss a moment then come back to CDL for detailed daily “General Hospital” spoilers plus comings and goings, news and more.