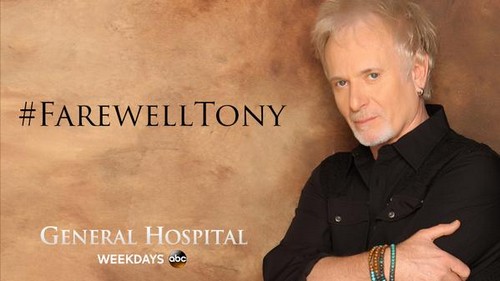 Anthony Geary’s last official day in Port Charles has come and gone, but this “General Hospital” spoiler indicates that the winds may be changing. In an interview with TV Insider to coincide with Geary’s departure from GH, he lambasted Ron Carlivati who he refers to as “the writer.” Geary described how Carlivati intentionally and continually snubbed the veteran actor.

Geary alleged that Carlivati has never even spoken to him, on set or off. He described how he shared a table with Carlivati at the Emmys and the lead writer still never spoke to him – not even to congratulate Geary on his record-breaking eighth win. There was definitely bad blood between Carlivati and Geary.

Geary was asked if there was “any chance you’ll come back to GH for a little visit some day.” He responded, “After this interview, I don’t think that’s a possibility. But if it ever happened it couldn’t be as a stunt or to rock Lulu’s newest baby. There are too many variables. Where will I be? Where will the show be? Who will be writing?”

Geary had made it clear that he was totally dunzo with General Hospital but now since Ron Carlivati has been canned, his outlook may have changed. The head writer was fired with no warning and replaced with Jean Passanante and Shelly Altman who were co-head writers at The Young and the Restless. Both had worked with Carlivati before but now will be free reign without the heavy handed scribe at the helm.

After Carlivati’s firing announcement, Geary has now reversed his stance on returning to General Hospital saying, “If the story is interesting to me and it works out, I may come back to the show for six weeks or so.” Showrunner Frank Valentini, for his part, is thrilled saying, “He has millions of friends here. It’s not a question of him being able to stay or come back. It just has to be a good enough, solid to bring [him back].”

Previously, Valentini has said he was “devastated” when Geary left the show. And while Geary had said in the TV Insider interview that he was sick of “being told how to do my job” and said “there’s a mistrust of actors on our show.” Yet now his tuned has changed and Geary told Entertainment Weekly, post-Ron Carlivati firing, “I’m not sick of Luke. He’s an infinitely fascinating character.”

Then he added, “I really don’t think we have exhausted what he can do. It depends on the writers and how far they want to look. We had just been repeating ourselves for a while. I had become a dad, a grandfather. There was no way I was going to stick around to become just another guy. If they come up with something, a twist, I would come for it.”

There you have it GH fans, looks like with Anthony Geary’s nemesis Ron Carlivati gone, we may yet see Luke Spencer back in Port Charles for another go-round – hopefully with a much better written storyline compliments of Jean Passanante and Shelly Altman!