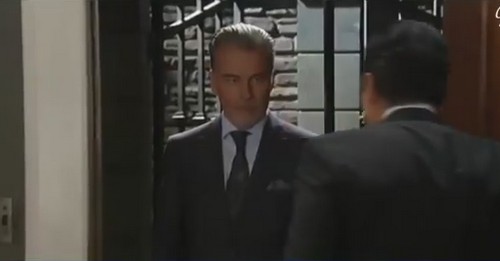 There’s just one day left before the live shows! Check out these “General Hospital” spoilers for the Thursday May 14 episode that will amp up all the drama for the two live episodes on Friday May 15 and Monday May 18. Check it out!

Now that Julian Jerome (William deVry) was confronted by Sonny Corinthos (Maurice Benard) and Shawn Butler (Sean Blakemore) about the hit on Duke Lavery (Ian Buchanan), he’s scrambling. Poor guy. Julian just found out he has a sick kid he can’t see, Alexis dumped him and now all this. But, to be fair, Julian did order the hit on Duke no matter the he tried to blame it on an enthusiastic underling.

Julian will head to the garage and will want to know from Jake Doe (Billy Miller) what he told the cops about Duke’s shooting when he was hauled in for questioning. Jake will make it clear he’s no rat and that he didn’t tell them anything and will also tell Julian that the PCPD accused him of killing Duke. If Julian asks about Carlos Rivera (Jeffrey Vincent Parise), Jake will say he covered for the organization.

Jake will use this opportunity to insinuate himself deeper with Julian and perhaps even make it clear that he’s willing to take the fall for the shooting if he has to. After all, Julian’s daughter Sam Morgan (Kelly Monaco) has been his champion and Jake can even play the new dad card and tell Julian he doesn’t want him to go to jail when he has a new baby in his life. Julian will take the bait!

Remember on Wednesday’s show, Lulu Spencer (Emme Rylan) stopped by General Hospital to drop the truth bomb on Liz Webber (Rebecca Herbst) that Hayden Barnes (Rebecca Budig) is shacking up with Nikolas Cassadine (Tyler Christopher) on Spoon Island. This will aggravate Liz who will then confront Prince Nik about diddling Hayden when she was lying about being married to Jake.

But as we’ve seen, Hayden has zero shame and not only will not show remorse, but will make it clear to Liz that she can blow up her her happily-ever-after with Jake with a word. After all, Hayden knows who Jake really is, so all she has to do is make a couple of phone calls to reveal that Jake is Jason and Liz and Jake will be dunzo. Hayden will have the upper hand with both Nik and Liz.

Once Lucy Coe (Lynn Herring) gets word that Duke has died, she’ll seek out Anna Devane (Finola Hughes) and will tell her that Duke was still madly in love with her and that the two of them were just buddies (with benefits). Of course, Anna knows this, but it will comfort her to hear that Duke told Lucy how much he cared for Anna.

When Patrick Drake (Jason Thompson) breaks the news to daughter Emma Drake (Brooklyn Rae Silzer) that Uncle Duke has gone to heaven, she’ll ask if Uncle Duke can come back from this. After all, he has before. There are still some “General Hospital” rumors floating that Duke wasn’t really working for Sonny but had another ultimate boss.

Another rumor had it that Duke wasn’t really Duke and was a doppelganger. There have been fake Dukes before, so it’s in the realm of possibility that they may bring Ian Buchanan back at some point and explain it away. So the question is, is Duke dead or just “mostly dead” (a great phrase coined in The Princess Bride)?

Tune in for today’s exciting episode of GH then come back to CDL for some exciting “General Hospital” spoilers for the live Friday episode of the show!

Please enjoy the General Hospital video preview for May 14, 2015 below: