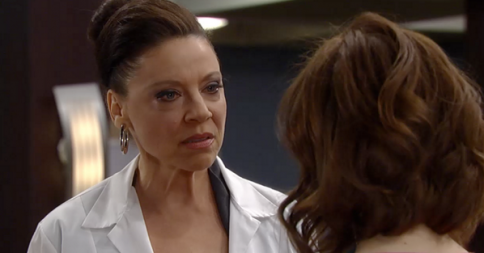 “General Hospital” spoilers for the ABC soap airing Monday, February 9 reveal that Dr Obrecht (Kathleen Gati) seems to be covering for Fluke by telling the cops and his family that the burned out remains are those of Luke Spencer (Anthony Geary). GH character that you love to hate, Ava Jerome (Maura West) is purported to be dead, shot by Carlos Rivera (Jeffrey Vincent Parise) but Morgan Corinthos (Bryan Craig) and Kiki Jerome (Kristen Alderson) will get a mystery visitor that leaves Kiki worried about the fate of baby Avery – so much so that she seeks out legal advice from Alexis Davis (Nancy Lee Grahn).

Elizabeth Webber (Rebecca Herbst) will confront Jake – Jason Morgan (Billy Miller) who is behind bars for playing a part in the planned bombing. She will accuse him of betraying her when she was his only champion. Jake will admit that he did plant the bomb and Liz will demand answers that he may not be able to give. Ned Ashton (Wally Kurth) will rant to Olivia Falconeri (Lisa LoCicero) about the injustice of the governor giving Sonny Corinthos (Maurice Bernard) a pardon for saving the Haunted Star. He’s also plotting to spy on Alexis.

On Monday’s “General Hospital”, also expect to see Helena Cassadine (Constance Towers) make an interesting offer to Tracy Quartermaine (Jane Elliot). But the real questions are – is Luke really dead as Obrecht says? We all know you can’t trust the no good Dr Obrecht ever! So I seriously doubt that the barbecued corpse she showed off is Luke – more likely, it’s Bill Eckert. And, given Helena’s skill with mind control, there’s a chance that Fluke really is Luke but under an evil Cassadine mind control spell. However there are so many problems with Fluke being Luke, as we’ve explained previously, that we truly hope that GH has much better answer than lame mind control.

Since we’ve never seen Fluke and Luke together, they could be one and the same (think Fight Club) and that should be revealed soon. And of course, we know that Ava is not dead. She’s a bad apple that will keep turning up. With Kristen Alderson set to leave “General Hospital” for good and Hayley Erin stepping into the role of Kiki Jerome, perhaps she’s taken baby Avery and run away then come back looking all new. What we do know is that Hayley will step in as Kiki by the end of February so we can expect a segue of some sort.

And since it’s Valentine’s Day on Saturday, expect to see romance heat up between some of our favorite Port Charles’ couples. Sam and Patrick will make big plans. And after all, now that Sonny is out of Pentonville, he and Carly should be heating things up again soon. Share your thoughts below on who is going to hook up on GH for V-Day and be sure and stay tuned to CDL for more exciting “General Hospital” spoilers.