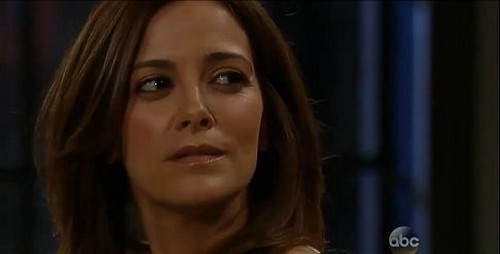 According to “General Hospital” spoilers, Hayden Barnes (Rebecca Budig) won’t wake until July 31, but once she does, all hell will break loose in Port Charles. Here’s a look at what’s in store for the feisty faker. Rebecca Budig’s engagement to play Hayden on General Hospital was initially intended to be just a few weeks gig. But fans were so thrilled with seeing Budig on GH and with the devilish bad girl she created in Hayden that showrunners decided to revive her from her coma and let her play on.

With Hayden’s awakening slated for a couple of weeks from now, there’s time for everyone who knew her to get worked up about what will happen when she comes to. The main person concerned with Hayden’s return to consciousness is Nikolas Cassadine (Tyler Christopher). Not only is she holding on to his secrets, but she may realize that he put the hit on her. Nik not revealing Jake Doe’s (Billy Miller) identity is one thing, but hiring a hit man is criminal and could land the prince behind bars.

Jake and Sam Morgan (Kelly Monaco) know there’s a link between Hayden and Nik since Nik had her driver’s license in his safe and allowed her to stay at Wyndemere once her fake-wife to Jake ruse was exposed. And Patrick Drake (Jason Thompson) will let Sam know that Hayden is about to wake so she and Jake can lurk nearby and wait to get her to spill the secrets of Jake’s identity. “General Hospital” rumors are swirling that Jake’s identity will be publicly revealed on August 7th.

At Sonny Corinthos (Maurice Benard) and Carly Corinthos’ (Laura Wright) wedding, Damien Spinelli (Bradford Anderson) will realize he was right about Jake all along and spill the secret. Thing is, Jake may already know. But that’s not the only thing Hayden knows. Hayden has dirt on Nik and Liz Webber (Rebecca Herbst) related to Jake’s identity, but also on Ric Lansing (Rick Hearst). She won’t have many friends in Port Charles when she awakens.

And when the town realizes Nik was keeping Jake’s identity a secret for months, he’ll have few friends left. A huge sector of Port Charles is furious with Nik for taking over ELQ and this news may wipe out the affections of anyone else who was on his side – including Sam. Liz may even bail on him when she finds out he hired a hit man to deal with Hayden and that it wasn’t a mob-related misfire. Nik will only have his mom Laura Spencer (Genie Francis) and, interestingly, Hayden on his side.

Nik will find it beneficial to team up with Hayden and she’ll insist they resume their personal relationship as part of the deal. That will put Hayden back in Nik’s bed in Wyndemere even though he tried to kill her. Hayden can be reasonable if she gains access to a luxurious lifestyle she’s wanted. But before they team up, she has to wake up. And when Hayden comes to, Nik will be one of her first visitors and he will threaten her to keep her mouth shut or else.

But if Hayden goes ahead and tells the secret, Nik will have nothing to hold over her head. Hayden is a loose cannon, so there’s no telling if she will tell. What’s likely is that she may tell Jake in private but then tell him he can’t let on or else she’s dead meat. Jake will then be free to work through his feelings about Liz, their back to life son Jake Spencer (James Nigbor), Sam, Danny, and what’s next for him once everyone else knows he’s Jason Morgan.

We can’t wait to see Hayden back on her feet and stirring up trouble in Port Charles. Don’t miss a moment of the action heading up to this big reveal then come back to CDL for tons more “General Hospital” spoilers, gossip and news.