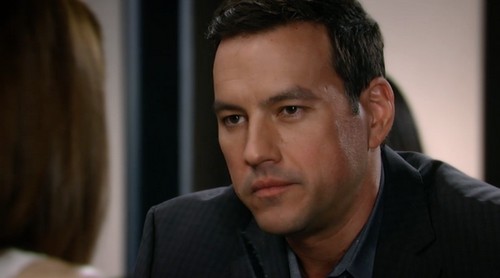 It’s weekly GH cliffhanger day! Here are some “General Hospital” spoilers for the action that will leave us hanging on the Friday June 19 episode of your favorite ABC soap. Luke Spencer (Anthony Geary) and Laura Spencer (Genie Francis) are off on their quest to find their kidnapped kid Lucky Spencer (Jonathon Jackson). Despite their not really being reunited, the exes are happy to be together and Luke tells Laura their times together were good. And then there’s the question of whether a blast from Luke’s past in the form of Holly Sutton (Emma Samms) has taken Lucky or if it was Helena Cassadine (Constance Towers) or another mystery party.

Luke will still be suffering qualms over ditching his lady love Tracy Quartermaine (Jane Elliot) but then he gets caught up in memories of the past and not only his past with Laura. But Tracy has bigger fish to fry – she and Michael Quartermaine (Chad Duell) have to figure out who’s the culprit behind the potential ELQ takeover. Michael tells Sam Morgan (Kelly Monaco) and Jake Doe (Billy Miller) to work together to find out who Rosalie Martinez (Linda Elena Tovar) is working for. The dynamic duo will sort this out quickly, but will it be in time?

The fate of ELQ is now in Dillon Quartermaine’s (Robert Palmer Watkins) hands. And Nikolas Cassadine (Tyler Christopher) is tempting Dillon to hand over just half a percent of his ELQ voting stock in exchange for Nik investing in Dillon’s independent film production company. Dillon was worried that his mom Tracy would be angry but he really wants to make more films. Will he sell? And will Nik’s pushing for the shares raise Lulu Spencer’s (Emme Rylan) suspicions. But Nikolas’s evil plans may not work out the way he wants and a surprise will take him off guard and shake him up.

And over at ELQ, someone will walk in on Morgan Corinthos (Bryan Craig) and Denise DeMuccio (Maura West) in flagrante delicto – aka undressed – and either about to get it on or just finishing up getting it on. Did they make it all the way to doing the deed or were they stopped in time? And since they were in Michael’s office, will it be Michael that walks in? Or Sonny Corinthos (Maurice Benard) coming to talk about visiting baby Avery? Or will it be Rosalie? No matter who it is, it won’t be a good thing. Kiki Jerome (Hayley Erin) is going to end up hurt because you know she’ll find out eventually.

At the PCPD, Valerie Spencer (Brytni Sarpi) tells Dante Falconeri (Dominic Zamprogna) that she should quit her job since the headlines make it look like they were acting improperly. Valerie doesn’t want to hurt Lulu or have her thinking that they’re involved somehow. But Dante will tell her that Lulu thinks no such thing and she should keep her job. They’ll have a bonding moment and it foreshadows that there may be more than friendship in store for them. Once Valerie finds out that Lulu is keeping secrets from Dante, who knows what could happen?

Meanwhile, Nathan West (Ryan Paevey) will chastise Maxie Jones (Kirsten Storms) for being ugly and confrontational to Valerie. But will Nathan reveal that he and Valerie used to have a thing? And once he does get around to telling her, doesn’t Nathan know that Maxie won’t back down but will engage in further plotting to get Valerie run out of Port Charles? Nathan hasn’t seen the worst of Maxie yet, but it won’t be long now.

Don’t miss a moment of Friday’s action packed show then come back to CDL for lots more “General Hospital” spoilers, news and gossip.