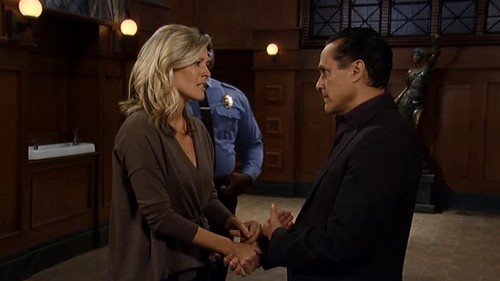 Freshly revealed “General Hospital” spoilers indicate that Sonny Corinthos (Maurice Benard) is set to propose to Carly Corinthos (Laura Wright) yet again. Perhaps for these two, the fourth time will be the charm. The proposal will come soon, then the wedding will be slated for the busy viewing season in September. In their case, maybe the time is right for this pairing to get their happily ever after.

Now many people count Carly and Sonny as already being married three times. Let’s cover that here. Married is a legal state, wedding is an event. So, yes, Carly and Sonny will technically be on their fifth wedding, but this will be them being legally married for the third time – just to let you know we can count over here at Celeb Dirty Laundry!

If you recall the first time they got married, Carly was fresh off a divorce with AJ Quartermaine and she married Sonny primarily so she couldn’t testify against him. She had recently cheated on Jason Quartermaine (then Steve Burton) with Sonny and got pregnant as a result then lost the baby. There was pretty much nothing but hurt and anger between Sonny and Carly at the point they said “I do.”

But after they married, they did fall in love and even later renewed their vows at a second wedding out of the country and this time, when they said they loved each other, they really meant it. But then life draws them apart, they separate and Carly sees him sleeping with his lawyer Alexis Davis (Nancy Lee Grahn) resulting a pregnancy. They ended up divorced and Sonny with a new daughter.

Then Carly faked her death, and Sonny later faked his – happens to all couples, right? The first time they married, Carly was portrayed by Sarah Brown. Then after they both got back their lives after faking their deaths, they got married a second time in a ceremony performed by Father Coates in Sonny’s penthouse apartment and, this time, he wed Carly #2 Tamara Braun.

Carly then got pregnant and things were looking good until Brenda showed up. But then Ric Lansing (Rick Hearst) and Luis Alcazar (Ted King) messed things up and when Carly was in labor, Sonny shot her in the head. The shooting and coma were not good for their new marriage. Carly fooled around with Alcazar and Sonny with Sam Morgan (Kelly Monaco).

But marriage number two truly ended for the duo when Sonny finds out Carly lied about him being the real father of Alexis’ baby. There was just too much dishonesty between them and they decided to divorce, yet again. The Carly and Sonny third wedding was just as shady as their first and for exactly the same reason – Carly wanted to keep from testifying against Sonny for a shooting.

This was the least romantic wedding ever with the bride locked in a closet moments before the ceremony, Jason trying to talk her out of it and her deciding to go ahead with it but crying throughout. Then when Sonny tried to kiss her, she turned her face aside. That had to be one of the most jacked up weddings in the history of Port Charles. And this was when Sonny wed Carly #3 Laura Wright!