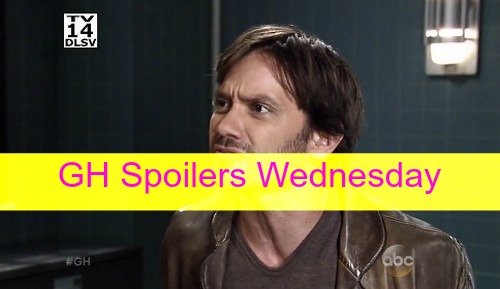 Here’s the “General Hospital” spoilers you need for the October 14 episode of the hit ABC soap. Wednesday’s episode will have a wedding, a confrontation, a shock, and some accusations. First, at Dillon Quartermaine’s (Robert Palmer Watkins) movie set over on the Haunted Star, Maxie Jones (Kirsten Storms) and Dillon make a horrifying discovery.

Is it a dead body? And if so, is it Carlos Rivera (Jeffrey Vincent Parise) or perhaps Kyle Sloane (Robb Derringer)? Likely it is Kyle Sloane’s corpse since Paul Hornsby (Richard Burgi) shot him down on the docks and couldn’t have carted his bullet-riddled body too far. Will Paul be upset that his son discovered the body of the man he murdered?

If it is Kyle’s body, that may relate to the task that Paul assigns to Ava Jerome (Maura West) to take care of for him. Ava doesn’t want to do what Paul is demanding of her but then he threatens to send her back to jail. Ava needs to find a way to get that flash drive away from Paul so he can’t keep on leveraging her this way. Ava will have no choice but to cave and do whatever it is that Paul wants, no matter how dastardly and what risk it poses to her.

Anna freaks out and says she doesn’t know and if she did, she’d tell Jordan. Will Jordan notice that the former Federal agent is acting a little strange and touchy when it comes to the subject of the missing mobster? Will Jordan suspect Anna?

Also at the PCPD, Valerie Spencer (Brytni Sarpi) is finally standing up for herself. Nathan West (Ryan Paevey) approaches her to apologize for the pregnancy test misunderstanding but Valerie isn’t listening to his mea culpa – and rightly so. Nathan picked up a bag she dropped, assumed it was hers, didn’t talk to her, then ran to Dante Falconeri (Dominic Zamprogna) and said he thought she was pregnant. Valerie accuses Nathan of trying to ruin her life and tells him to butt out. She’s livid and right to be so.

Sonny Corinthos (Maurice Benard) proposed to Carly Corinthos (Laura Wright) and has Morgan Corinthos (Bryan Craig), Michael Quartermaine (Chad Duell) and Dante on hand in tuxes for an impromptu wedding. Will Sonny make it through the ceremony without a medical crisis? Sabrina Santiago (Teresa Castillo) is there and stressed about her surprise pregnancy and Lulu Spencer (Emme Rylan) telling her that she’d better get used to mob Michael.

It also looks like Kristina Corinthos-Davis (Lexi Ainsworth) might be at their wedding, too. Will this be the last time we see Sonny for a while? We know he’s going to a prestigious physical rehabilitation center, but will we see this on screen or is Maurice Benard taking a break from GH while Sonny’s off healing? Seems like a good time to take a vacation while Ava has Avery, he needs rehab, and Michael is running the mob. Interesting to see what they’ll do with this plotline. More as this develops.

All this and more on tomorrow’s episode of GH – watch then come back to CDL for more detailed “General Hospital” spoilers, gossip and more.