General Hospital (GH) Spoilers: Jake Revealed as Jason Morgan at Nov 6 Wedding to Liz – Who Does It? 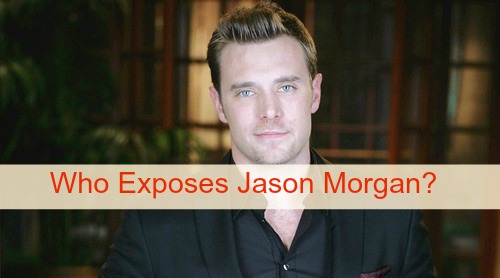 Today’s “General Hospital” spoilers is all about the Jake Doe (Billy Miller) reveal. We know from ABC GH promos that the Jake and Liz Webber (Rebecca Herbst) wedding is the reveal of his identity as Jason Morgan. That’s set for November 6th. But who will tell those few in Port Charles that haven’t already figured out that Jake is Jason? That’s the big question about the critical (and long awaited) event that will halt the wedding.

The news will not be news to Jake, at any rate, since “General Hospital” spoilers indicate that Jake will have put the pieces together by then and know that he’s the missing mob assassin. But even though Jake figures out who he is, he won’t tell key people in his life while he sorts this all out since he won’t recover all of his memories for quite some time. He’ll know his name, but not much else.

Here’s a look at who could be the one to make the big Jake reveal announcement at the wedding and help you consider who you think will be the proclaimer of the truth.

Liz Webber: Liz has been tormented for months about keeping the secret of Jake’s identity, but will she finally tell Jake at the altar and halt her own wedding? If Liz doesn’t put a stop to it, she’s knowingly committing bigamy and that’s not cool. Plus, rumor has it that Laura Spencer (Genie Francis) is back in Port Charles on Friday, October 2nd and will tell her to come clean or else. Maybe Liz will finally do the right thing.

Laura Spencer: Laura comes back to PC with a mission to make her former daughter-in-law do right by Jason. Laura will hit Liz hard with some major guilt and a threat to tell the truth if Liz doesn’t. Look for Laura to show up at the wedding and give Liz the evil eye if she doesn’t tell her married fiancée the truth. If someone else doesn’t break the news, Laura could shout it from the rafters despite the risk to her oldest son.

Jake Doe: It may sound strange, but Jake himself could wait until the very last “man and wife” moment to bust Liz for lying. Jake may know who he is but keeps quiet to test Liz’s love and the depth of her betrayal. He may even go 99% of the way through with the wedding to give her a chance to finally tell the truth, but no way will Jake put a ring on it when he knows he’s already married to Sam Morgan (Kelly Monaco).

Sam Morgan: It may be Sam herself that finally gets a clue that her hubby is alive. After all, Sonny Corinthos (Maurice Benard) swore that Jake was with him and saved him when he was shot – plus Mrs Yi at Noodle Buddha said she knew Jason’s voice even though it was Jake. Sam may turn up some info while investigating Sonny’s shooting and she could pull an epic “The Graduate” style wedding interruption.

Damien Spinelli: The Jackal is headed back to Port Charles for an extended stay, so it could be Damien Spinelli (Bradford Anderson) who breaks the “Jake is Jason” news to all assembled at the church. Damien is already suspicious of Jake since he mistook him for Jason at a glance. And once Damien is back in PC and hears that Sonny mistook Jake too, maybe he’ll do some digging, discover the truth, then blab it.

Nikolas Cassadine: It’s likely that Nikolas Cassadine (Tyler Christopher) is in cahoots with Paul Hornsby (Richard Burgi) and that’s why he took over ELQ. Jason being dead helped Nikolas seal the deal. But if Nik wants out of his money laundering agreement, all he has to do is spill the truth about Jason and he’ll lose control of ELQ and can wash his hands of Paul. Plus, that would save Nik from being exposed by someone else.

Hayden Barnes: Hayden knows she knows something about Jake’s identity, but her memory is still choppy. There has been a “General Hospital” rumor for some time that Hayden will be the one to tell Jake that he’s Jason in a private reveal to the amnesiac rather than a public one. But if Hayden decides to make a scene at the wedding and wants to force Jake to acknowledge the truth, she may spill mid-ceremony.

Helena Cassadine: We know that Helena Cassadine (Constance Towers) knows that Jake is Jason and she loves to show up at Port Charles weddings to ruin them with her antics. Plus, she has a curious obsession with Jason, so why not come and spoil the former hit man’s big day with Liz? And, since Helena hates the Spencers, and Liz is Spencer-adjacent, she would love to crash the wedding and reveal the ugly truth.

Little Jake Spencer: “General Hospital” rumors indicate that little Jake Spencer (James Nigbor) is more than just a shy little kid returned from a kidnapping. Little Jake may, in fact, be Helena’s miniscule Manchurian Candidate waiting to wreak havoc in Port Charles. The news may come “out of the mouth of babes” courtesy of little Jake who could tell the assembled crowd that Jake is his daddy and his mommy is a big, fat liar.

Patrick Drake: Patrick Drake (Jason Thompson) is a good guy who does the right thing – no matter how painful it might be for himself. Based on Sonny’s declaration that Jake is Jason, Patrick might pull Jason and Jake’s surgical scans and realize that it’s the same brain he’s had under the knife twice. Patrick could reveal the truth at the wedding even though it will wreck his engagement with Sam and ruin BFF Liz’s wedding.

So what do you think? Who will cut short Jake and Liz’s wedding with the Jason identity reveal? Please share your comments below. And be sure to check back with CDL for more “General Hospital” spoilers on Jake, Liz and more on the daily.