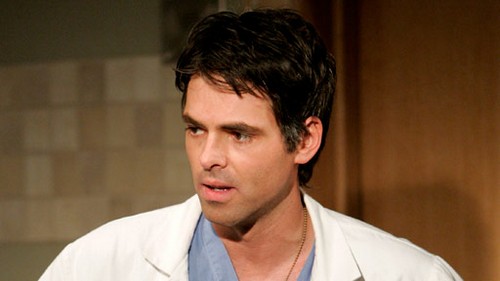 Jason Thompson’s contract issues may trigger a “General Hospital” spoilers – Patrick Drake could be out of Port Charles soon. Thompson has played a doc on GH for the past decade, but there are rumors swirling that he may not renew his recurring player contract with the ABC soap according to Daytime Confidential. But why? Is Thompson dissatisfied with the way Patrick Drake’s storyline is going or is it the ratings decline that has him worried about the fate of the soap?

The soap site quotes an insider saying that the other three on-air soaps would beat down his door if Jason Thompson became available and also says “He’s been floating since Kimberly McCullough left.” Hopefully this is just a “General Hospital” rumor and not a reality. GH won’t be much of a medical facility without any doctors. Think about it. There’s Patrick, Lucas Jones (Ryan Carnes), the rarely seen Monica Quartermaine (Lesley Charleson), and riotous chief of staff Dr Obrecht (Kathleen Gati).

They just killed off Dr Silas Clay (Michael Easton) and appearances of Dr Kevin Collins (Jon Lindstrom) are nearly non-existent. Who will treat the patients of GH? We barely even have any nurses we recognize on site much less docs. Plus, there’s a huge conflict coming with the Jake Doe (Billy Miller) reveal and Patrick’s romance and soon-to-be-official engagement with Sam Morgan (Kelly Monaco). This is not the time to let Thompson walk off the ABC lot.

And, let’s face it, they could write Jason Thompson into a romance with any female character in Port Charles and it would be worth watching. Patrick Drake is smoking hot, has a cute kid – and sings and plays the guitar. But perhaps that guitar is the source of Thompson’s reported reluctance to renew his GH contract. Is the sexy surgeon/singer planning on abandoning soap acting to focus on his music? Let’s hope not. Maybe GH could write in a musical plot line à la Ned Ashton (Wally Kurth) as Eddie Maine.

The sole complaint I have about Patrick Drake as a GH character is that he doesn’t spend enough time shirtless… If you heart Patrick Drake – Jason Thompson, sound off on Twitter before it’s too late to co-head writers Jean Passanante @PFossil, Shelly Altman @MichelleAltman1 and showrunner Frank Valentini @ValentiniFrank. Also, share your thoughts on Jason Thompson’s possible exit from GH in the comments below. Check back with CDL often for more “General Hospital” spoilers, gossip and more!