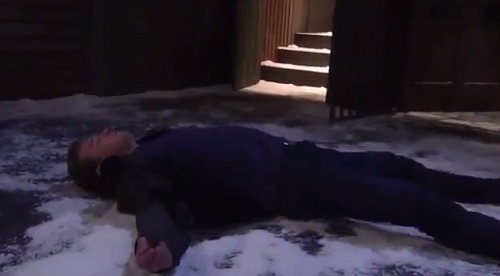 “General Hospital” spoilers for Wednesday, January 21 tease another day of exciting drama in the less than sleepy town of Port Charles, and according to GH rumors, fans will not want to miss a single second of the all new episode of the ABC soap. On Tuesday’s episode of GH, Jason Morgan (Billy Miller) completely botched his mission to kill Patrick (Jason Thompson) and Sam because being inside his old home spurred some major flashbacks for him. He stumbled down to the pier and passed out with the trinket he stole from Sam’s house. According to the “General Hospital” spoiler video for January 21, someone will find Jason unconscious on the pier with the trinket – which proves he was inside Sam’s house.

In other “General Hospital” news, Sonny and Julian’s attempt to expose Fluke continues. In the “General Hospital” spoiler video for Wednesday, January 21, Sonny makes a phone call with his contraband phone and warns somebody on the other end that he “has to talk to them about Luke.” Meanwhile, on the outside of Pentonville, Carly (Laura Wright) corners Shawn and demands to know what her old flame Sonny has him working on.

“General Hospital” spoilers also tease that on Wednesday’s episode of the ABC soap Shawn will be on the receiving end of a restraining order – and it looks like it is from Michael Corinthos. The GH promo for January 21 shows Michael meeting with Alexis and revealing he needs her help “getting Sonny’s bulldog off his back.” If Michael (Chad Duell) gets a restraining order against Shawn, then there is no way he will be able to protect him from the Luke Spencer (Anthony Geary) imposter. The GH spoiler video also reveals that on Wednesday’s episode Anna Devane and Jordan (Vinessa Antoine) will have a hushed conversation and Anna reveals that she may not ever see Jordan again.

So, GH fans, how are you liking all the exciting drama this week? Who do you think will find Jason Morgan at the pier? Will Fluke really go after Michael, and how will Shawn be able to protect him if he has a restraining order? What is Anna talking about – is she leaving Port Charles? Let us know what you think in the comments below and don’t forget to check CDL tomorrow for more “General Hospital” spoilers and news.