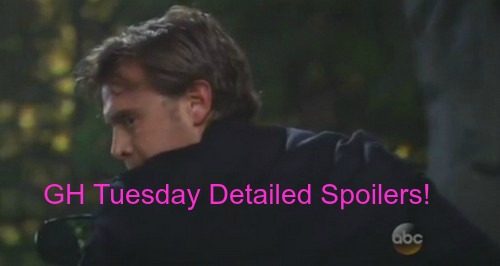 Check out these “General Hospital” (GH) spoilers for the Tuesday, November 17 episode. Jason runs away, Ava heats it up and Sonny throws a tantrum – Tuesday’s show is not to be missed.  Let’s hope that even though Jason Morgan (Billy Miller) has amnesia, he remembers that you can’t drive a motorcycle to Greece – he’s leaving town to search for Helena Cassadine (Constance Towers) whom Nikolas Cassadine (Tyler Christopher) swears is dying.

If the matriarch is on her deathbed, is that why Robin Scorpio (Kimberly McCullough) is being held by forces unknown? Is she working on a cure for the Cassadines? Either way, looks like Jason is headed to Cassadine Island looking for answers.

Meanwhile, Paul Hornsby (Richard Burgi) is headed to sexy town with Ava Jerome (Maura West) at his side. Paul thinks Ava should toy with Morgan Corinthos (Bryan Craig) to get dirt on the Corinthos cartel, but Ava will be offended.

Good thing Paul likes things rough and will turn that slap into something a little more intimate… Ava won’t like, though, that he’s willing to share her. Little does she know she’ll be sharing Paul with several other ladies around town soon!

Know who else doesn’t like sharing her man? Lulu Spencer (Emma Rylan)! She is not happy that Dante Falconeri (Dominic Zamprogna) admitted to shagging Valerie Spencer (Brytni Sarpi) then showed up to their fertility doc appointment with Val’s lipstick on his collar.

To make things worse, Valerie and Dante will be working closely together soon. Lulu is fed up and heads to lawyer up with Alexis Davis (Nancy Lee Grahn) and make their split official. Dante will be devastated and Valerie elated.

Dante runs into Valerie on the job and finds her dressed to kill. Is Valerie working undercover as a street walker? We know that Val will get an assignment that has her working side-by-side with Dante (which will thrill her) but will they be working the streets together while she’s in short skirts and high heels? That can be a temptation for Dante, particularly after Lulu slaps him with separation papers. Maybe Valerie will end up preggers after all!

Maxie Jones (Kirsten Storms) has to bail Nina Clay (Michelle Stafford) out at work because nutty Nina is clearly clueless about the magazine biz. Maxie will give Nina a makeover to make her look the part, but how can she play the part?

No problem, Maxie knows her stuff. Too bad Julian Jerome (William deVry) wants them to crash and burn. He may be thrilled at Nina’s incompetence, but trust Maxie to turn this around and make the most of the opportunity they have.

Carly Corinthos (Laura Wright) also has a fiasco on her hands – Sonny Corinthos (Maurice Benard) is being a big fat baby about being stuck in that wheelchair. He doesn’t want any ramps, so Carly wants to know if they should just hose the moping mobster down in the yard since he can’t get to the shower.

Ava really struck a nerve at the courthouse telling Sonny’s he’s not a man anymore because of the chair and saying Carly was going to get sick of taking care of a cripple (that’s Ava’s ugly choice of words).

Sonny is tormented because Ava vocalized all the negative things Sonny was already thinking and now he’s acting out and pushing Carly away. Carly throws down the gauntlet and tells him that if he doesn’t straighten up, she may really just leave him.

Will Sonny wise up before she walks out? Perhaps Morgan’s antics will distract them from their marital strife and they will unite to deal with him because, of course, Morgan did not do as Sonny told him and went straight to Ava.

After leaving Ava’s annoyed, Morgan will go to Kiki Jerome (Hayley Erin) who is getting a talking to from her not-dad Franco (Roger Howarth). Kiki’s behavior has Franco very worried – as he should be – and he tells her he cares about her and just wants the best for her.

Morgan also has supportive words for Kiki when he stops by and encourages her to get into the workforce. Could Nina give Kiki a job at the magazine? I bet she would if Franco asked really nicely.

So much happening on Tuesday in an action-packed week. Watch and then check back with CDL for detailed daily “General Hospital” spoilers plus casting news and more.