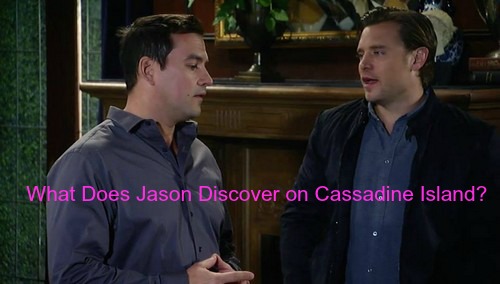 “General Hospital” (GH) spoilers reveal that, later this week, a frustrated Jason Morgan (Billy Miller) will grow more desperate for answers and do something drastic. Fiancée Liz Webber (Rebecca Herbst) and wife Sam Morgan (Kelly Monaco) will launch the opening salvos in an epic battle for Jason’s love which will push him to the brink. Surprising everyone, the sexy amnesiac will flee town, but he won’t be alone for long.

Sam and Liz will both give chase – not wanting the other to gain an advantage in the contest for Jason’s heart. And where will the former hit man go? On Monday, Nikolas Cassadine (Tyler Christopher) will dangle his granny Helena Cassadine (Constance Towers) in front of Jason as the source of his problems – to save his own skin. To be fair, Nikolas knows more than he was letting on, but he was not the architect of Jason’s torment (at least as far as we know).

So Jason will check out of Port Charles and head to Cassadine Island. “General Hospital” rumors indicate that he’ll find someone unexpected on the island. Who could it be? Is that where Robin Scorpio (Kimberly McCullough) is being held? And, if so, does she have the antidote to his amnesia? Judging by the henchmen reaction to Robin talking to Patrick Drake (Jason Thompson) about Jason, there are still some secrets in play that none of us know about.

Will Helena – or the unexpected player – have the answers Jason wants? Also, will Jason discover something critical about his son little Jake Spencer (James Nigbor)? What’s interesting about both Sam and Liz following Jason to the Greek island is that one wants him to find out everything: Sam. And the other wants him to find out nothing: Liz. Will Liz be able to thwart Jason’s fact-finding mission without raising the suspicions of Jason or Sam?

Will Jason return to Port Charles a new man? Depending on who they find on the island, this person may be aware that Liz has known the ‘Jake is Jason’ secret for a long time. Co-head writer Shelly Altman told Soap Opera Digest, “There are some surprises when they get there – somebody Jason is not expecting to see.” We know that Nikolas is in sporadic contact with his grandmother.

Did Nikolas tell Helena that Liz knew about Jason and was involved with him? Helena would love to blab that juicy tidbit! Also, with Billy Miller leaving soon for a short hiatus from the show, will he then flee Cassadine Island and leave Sam and Liz behind? Is this the set up for Miller’s vacation break? Sam and Liz may come back to Port Charles empty-handed while Jason keeps on going in pursuit of answers…

This weird field trip of husband/wife/fiancée will also involve Damien Spinelli (Bradford Anderson). “General Hospital” spoilers from Shelly Altman and Jean Passanante indicate that Jason will reach out to Spinelli for help digging up the past and The Jackal will happily join the quest. But obstacles external to Jason – Helena and persons – plus ones closer to home (like Liz) may prevent Jason from finding out what he needs to know to move forward with his life.

If Jason can’t figure out who he is, was, and wants to be from here – it may cost both Sam and Liz his love. Would Sam (or Liz) rather Jason have neither of them if she can’t win him? Is that how hard they’ll compete in this emotional tug of war? We’ll know soon. Don’t miss a moment of the Sam and Liz rivalry, Jason’s quest for answers and Spinelli acting as squire to his formerly Stone Cold BFF. And check back with CDL often for more “General Hospital” spoilers.