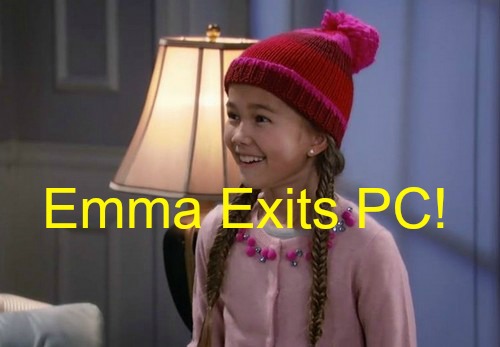 There have been what seemed like conflicting spoilers from the writers and Nathan Varni about Emma’s fate, but now Jason Thompson has set the record straight. No, Brooklyn Rae Silzer is not being let go from the show as he exits – however, she will no longer be seen as often.

Thompson told Fairman that Emma’s character may return on summers and for visits, but the character’s exit is planned as one where Emma will stay with her parents out of Port Charles for a happily ever after for the entire Scorpio-Drake family.

This is bittersweet for fans in many ways. While the idea of Emma finally having both her mom and dad in her life seems sweet and is long overdue closure, for fans of Brooklyn, this is heartbreaking. She’s a top-notch little actor who can chew the scenery with the most talented adults.

Her scenes when the breakup of Patrick and Sam Morgan (Kelly Monaco) was revealed were poignant – there wasn’t a dry eye in most households as they watched Brooklyn aptly portray the anguish that Emma experienced as she lost yet another mom.

Because of that fantastic work, we definitely hate to see the actress go, but we have to be pleased for the character of Emma to finally have an intact family. Let’s also hope that Brooklyn is up for a Daytime Emmy for her shattering performance in those scenes.

However, her exit does raise some other questions. With Eden McCoy stepping into the role of Josslyn Jacks, that was a huge SORA (soap opera rapid aging) move. We have to wonder if TPTB would do that to Emma as well once all the fuss dies down over the Scorpio-Drake family exit.

Eden McCoy is a young teen while Brooklyn is just nine – yet Emma is older by nearly a year than Josslyn. Was Jason Thompson’s exit an opportunity to age the younger set in Port Charles? Let’s hope not – because that would mean we could lose Nicolas Bechtel and James Nigbor as well.

All these kids are about the same age, and they are all such talented actors – let’s hope the showrunners over at GH limit themselves to the one Josslyn SORA and leave the rest of the kids alone. What do you think GH fans, are you happy that Emma gets her happy ending but are upset to see Brooklyn exit?

Fingers crossed that we’ll see Brooklyn back often to visit her granny Anna Devane (Finola Hughes) on every possible school break that they can write into the script. Share your thoughts in the comments below and come back to CDL often for more “General Hospital” spoilers, news and updates.