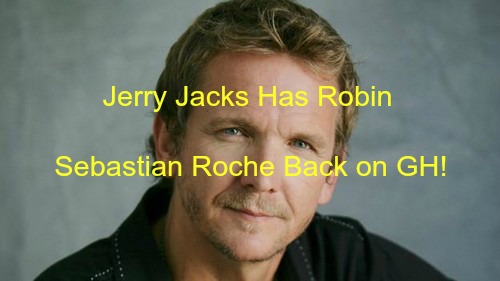 “General Hospital” (GH) spoilers tease that Robin Scorpio’s (Kimberly McCullough) kidnapper may be a blast from the past – Jerry Jacks (Sebastian Roche). Is the Demon from Down Under back to torment Robin anew?

Now that Helena Cassadine (Constance Towers) is dead and Paul Hornsby’s (Richard Burgi) master plan is falling apart, the show needs a new “big bad” even if it’s just a short storyline. Jerry has shown himself to be ruthless to Robin in the past.

You’ll recall when he and his band of thugs held the entire MetroCourt hostage that he shot Robin. Has Jerry now taken her hostage and has her working on a special project? We saw the henchmen threaten Emma Drake (Brooklyn Rae Silzer) which seems like Jerry’s work.

Back in 2012, Jerry was part of a scheme to kidnap Robin, aided and abetted by Cesar Faison (Anders Hove) and Liesl Obrecht (Kathleen Gati). Has he decided to repeat that crime for some nefarious reason? What could it be?

Last we saw Jerry, he had snookered Tracy Quartermaine (Jane Elliot) out of ELQ shares in October 2014 as part of a scam involving Larry Ashton (Hugo Napier) and Helena. At the time, Jerry claimed that he was cured of his polonium poisoning, but was he?

Is that why Robin is being held in a secret lab? Has Jerry’s polonium poisoning reactivated? You’ll recall that Robin made one batch of the treatment but when Jerry went to test it on Luke Spencer (Anthony Geary), Tracy forced Jerry at gunpoint to give Luke the whole dose.

That meant there was none left to treat Jerry’s sickness but he said last year that he had kidnapped Luke and used his blood to get a cure for the poisoning. But was that true? How likely is it that Jerry could get that done when Robin had struggled for so long to create a cure?

If you listen to the preview video on the Wednesday, December 9 episode at the end of the show, you’ll see a henchman threaten Robin and then her captor speaks up – although he remains unseen. Those were the dulcet tones of what is very likely Jerry Jacks.

We know that in the coming days, Anna Devane (Finola Hughes) and Patrick Drake (Jason Thompson) will take off to try and save Robin with a returned Robert Scorpio (Tristan Rogers) in tow. Will they find Jerry – and will they finish him off for good this time?

Don’t miss a moment of GH and stay tuned to CDL for more news on the Robin rescue storyline plus tons more “General Hospital” spoilers, news and gossip.