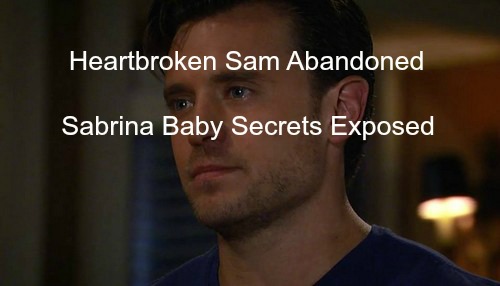 “General Hospital” (GH) spoilers leaked just before the December 9 show hint at some amazing action on the Wednesday, December 9 and Thursday, December 10 episodes. Sabrina, Johnny, Lulu, Sam, Patrick, Liz and Jason details were revealed and the episode looks amazing. So much happening!

First, we know that Johnny Zacchara (Brandon Barash) is back in town, but we don’t know why. Turns out the law still wants him and he’s worried his offshore accounts are being monitored. Johnny wants to hide out on the Haunted Star – and wants cash from Lulu Spencer (Emme Rylan).

Lulu is 100% willing to harbor the fugitive and fund him – so long as he takes care of Valerie Spencer (Brytni Sarpi) for her. But just how far will Johnny go? And when Dante Falconeri (Dominic Zamprogna) finds out she sent Johnny after Val, the poo will hit the proverbial fan!

Just as Lulu and Johnny are scheming, Dillon Quartermaine (Robert Palmer Watkins) will show up to try and make amends with Lulu. Johnny will go scrambling to hide behind the bar, but will Dillon spot him and question what’s going on?

Second, Jason Morgan (Billy Miller) finally hears Liz’s secret from Sam Morgan (Kelly Monaco) and heads off to confront his fiancée. Liz will be terrified that she’s about to lose it all and tries any and everything to keep Jason at her side but it’s too late.

Third, Sam may feel great the she’s exposed Liz’s lie and ruined her relationship with Jason, but karma is coming for Sam too. Sam has been lying to Patrick Drake (Jason Thompson) about her feelings and that lie is about to be confronted as well.

Sam has been using Patrick as a fallback in case she couldn’t win Jason back and the angry neurosurgeon has had enough. Starting on the December 9 show and maybe spilling over onto December 10, Patrick will dump a tearful and contrite Sam.

Before he came home, Patrick got some advice from Sabrina Santiago (Teresa Castillo) and he may or may not follow it – but the end result is Sam is ousted from Patrick’s life as he prepares to leave Port Charles. Emma Drake (Brooklyn Rae Silzer) will be devastated.

Then back to Sabrina – Michael Quartermaine (Chad Duell) is asking very specific questions about her pregnancy in a chat with Felix DuBois (Marc Samuel). Felix hedges then runs immediately to Sabrina to warn her that the jig is nearly up.

Felix says all Michael has to do is speak to a doctor about the pregnancy and he will immediately know that there’s no way she’s carrying his baby. Sabrina will flip out. And she doesn’t know Carlos Rivera (Jeffrey Vincent Parise) is still around, which will make things worse.

Last, Dante and Valerie share a hot kiss on their date at Kelly’s and Olivia Falconeri (Lisa LoCicero) walks up on it and goes nuclear. Val walks away to let them talk but lurks nearby to listen. Olivia gives Dante all kinds of hell for blowing up his marriage and continuing to be with Valerie.

Don’t miss a moment of the explosive December 9 episode of GH. Watch then come back to CDL for more “General Hospital” spoilers on the big action unfolding in Port Charles.