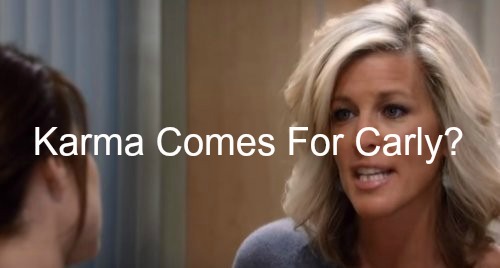 “General Hospital” (GH) spoilers indicate there will be many challenges ahead in 2016 for Carly Corinthos (Laura Wright). Will Carly finally face karma for her litany of intolerable tirades against anyone (and everyone) in Port Charles that she thinks has wronged her or someone she cares about?

In the last month alone, Carly has attacked Franco (Roger Howarth) and Liz Webber (Rebecca Herbst) mercilessly, and went after Ava Jerome (Maura West) before that and next on her hit list is Sabrina Santiago (Teresa Castillo).

But really, does Carly have the right to say anything to any of them? Let’s consider…

Carly came at Franco hard at GH and told him that his happy life with Nina Clay (Michelle Stafford) is “about to come crashing down on you” and told him to enjoy this time “where you almost pass as a worthwhile person.”

Carly once liked Franco enough to marry him and the only reason that fell apart was because she was cheating with her ex Sonny. Yes, Franco exposed her as the horrible person she is at their wedding, but that was on her.

Carly blames Franco for Michael Quartermaine (Chad Duell) being estranged from her and Sonny over the AJ shooting secret, but that’s not on Franco at all. And as for Franco being a killer, he hasn’t been since the tumor was removed from his brain.

Conversely, Sonny is a cold-blooded killer with no medical excuse for his crimes. How can Carly think she’s better than Franco? How does she have the nerve to walk up to him and say anything? How can Carly resent his love with Nina when she treated him so badly?

Carly has gleefully attacked Liz a couple of times lately. Carly was angry that Liz kept Jason’s identity from him and let them all think he was dead. Sure Liz did that, but Liz did it out of a place of love – and does Carly have any room to talk about identity lies?

Carly rolled into Port Charles using a dead friend’s name as her identity, slept with her mom Bobbie Spencer’s (Jacklyn Zeman) husband Tony Jones (Brad Maule) then utterly destroyed his life. Plus, how can Carly even dare criticize Liz when she caused Liz to miscarry?

Sure Liz lied about Jason, but Carly lies like she’s being paid to do it. She lies about the paternity of her children, lied about Sonny shooting AJ, cheats on everyone she’s with, and has lied in court and to the cops a number of times.

Carly has physically attacked Liz before – when she found out Jake was Jason’s son – and has gone off at her so many times over the years even though Carly was herself doing so much worse than Liz was doing. Admittedly Liz is no saint, but Carly is a real piece of work!

This confrontation has NOT happened yet, but it’s coming soon. At the Nutcracker Gala, Carly heard from Monica Quartermaine (Leslie Charleson) that the baby is coming earlier than they thought. That means she knows Michael isn’t the baby-daddy and will go after Sabrina soon.

But come on, does Carly have any room to rant at any woman for lying about a baby’s paternity? Carly’s lies about Michael’s father are the root of Sonny killing AJ. Not only that, but Carly tried to pass off Michael as first Tony’s son then Jason’s.

Carly also kept the truth from Sonny that Alexis Davis (Nancy Lee Grahn) was carrying his child because she was jealous she couldn’t get pregnant by Sonny at the time. Carly’s stance on “truth” about paternity always depends on how it affects her personally.

Overall, Sabrina is a good person, but tragedy has seen her act out a couple of times (drugging Ava, lying to Michael, etc.). But compared to Carly, Sabrina should be put up for sainthood. But that won’t stop Carly from attacking and being absolutely vile to her.

Carly has no pause button when it comes to confronting people and publicly calling them out even though she has done the same or worse than whomever she’s attacking. Isn’t it time that Carly got some comeuppance?

Wouldn’t it be great if at the 2016 Nurse’s Ball, Ric came back and showed a PowerPoint presentation of all of Carly’s horrible deeds? Maybe he could set it to a nice revenge song like Justin Timberlake’s “What Goes Around… Comes Around” or maybe “Forget You” by CeeLo.

She’s way overdue for a karmic slap down and let’s hope one comes her way – whether it’s Ric, whether it’s Liz, or whether fate steps in to put her in her place, it will be enjoyable to see her finally humiliated just like she’s done to so many others over the years.

What do you think GH fans? Do you want to see Carly finally get what’s coming to her? Do you think her rants are justified or she should just shut up since she’s done so much worse herself? Share your thoughts in the comments below!

Be sure to check back with CDL often for tons more “General Hospital” spoilers and news.