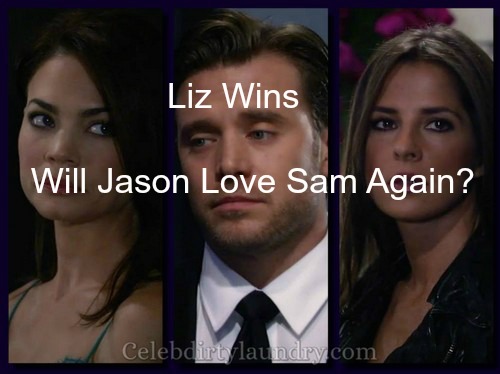 “General Hospital” (GH) spoilers tease that Jason Morgan (Billy Miller) is on the cusp of getting back with Liz Webber (Rebecca Herbst). Does that mean that he’s done with Sam Morgan (Kelly Monaco) for good or does JaSam still stand a chance?

Jason was furious when Liz first confessed that she had known who he was since the Nurse’s Ball, but he’s had time to cool off and process the mitigating factors. Most important is that Liz was in love with him before she knew his real identity.

Liz wasn’t lying when she said she fell for the man he is now and that had nothing to do with the Jason Morgan of old. And, more importantly, Jason fell for her knowing exactly who she was. But what about Sam?

Realistically, Sam and Jason haven’t found more than friendship in this revived life of his. In fact, Sam did NOT have romantic feelings for Jake Doe and only reclaimed feelings when she found out he was Jason Morgan.

So that will carry some weight. Though many fans hate Liz and hate the Liason pairing, you have to admit that Liz has loved Jason back before he died, she fell for and loved the Jake Doe that rolled into the ER that night, and she loved the new Jason.

Liz has loved Jason in all his various forms and saw through to the man inside – even when he was a hitman, even when he was an amnesiac. Sam, however, loves just one aspect of Jason – the dangerous hitman side – because that speaks to the darkness in herself.

But new Jason is not dark – he can go dark momentarily – but he’s a much lighter, kinder version of himself – more like pre-accident Jason Quartermaine. Liz, while she can be a schemer, also has more light in her than Sam.

Sure she lied about Danny’s paternity for a hot minute, but she’s never tried to have Sam harmed or killed. Certainly Liz is no innocent, but the fact that Liz has truly loved him for so long will not be lost on Jason.

Once he calms down enough to realize this, his heart will reopen to Liz. GH spoilers indicate that very soon, Jason will reunite with Liz – whether it’s for right now or the foreseeable future is yet to be seen. What does seem likely also is that the JaSam divorce will go through.

With Jason and Sam officially split, Jason is free to make his own choices. Carly Corinthos (Laura Wright) will counsel Jason to figure out what he wants and make his new life as he wants it to be. Jason is rich, is he has two kids, the Qs want him, Sam and Liz both want him, and he has so many options.

Once Jason sits down and ponders it, he’ll know it’s Liz he wants. But “General Hospital” spoilers also tease that Jason will soon begin to have romantic flashbacks to his life with Sam. What happens if Jason’s romantic feelings for Sam return in full?

What if Jason finds himself in the position of living with and loving Liz now – while also recalling all the love he had for Sam? The kids are a big factor for Jason – will he give up life with little Jake Spencer (James Nigbor) and Liz’s other boys?

Once Jason reconciles with Liz, it will become so much harder for him to extricate himself from that relationship (with or without matrimony involved) even if he finds his feelings for Sam are restored. Jason will get back with Liz soon, but may have buyer’s remorse within a short time.

Will Jason push down the feelings for Sam and honor his commitment to Liz? Even if Jason remembers his love for Sam, would he allow himself to love Sam again? Will Jason take up with Sam on the side? There’s so much to consider.

The bottom line is, GH fans, the drama between these three is far from over. Liz will win Jason back soon, but no way will Sam give up, especially since she’s lost Patrick Drake (Jason Thompson) over this mess. Sam is all in and won’t rest while Jason is with Liz.

Check back with CDL daily for detailed “General Hospital” spoilers and more.