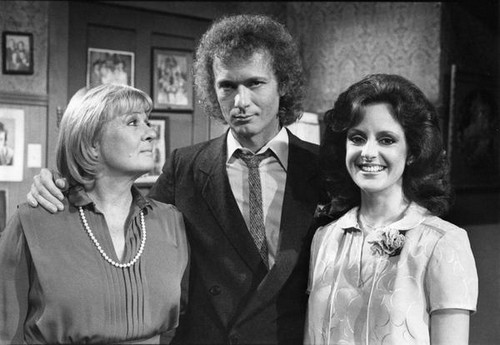 Today’s General Hospital of Wednesday, April 1 celebrated 52 years of our favorite ABC soap. The masterfully done black and white homage to old-school General Hospital brought us long overdue closure on the Luke / Fluke storyline. As we at CDL told you in spoilers, Luke’s mental trauma was caused when he killed his father then mother.

Interestingly, the incident occurred on the day General Hospital first came on the air – April 1, 1963. Today, we got a look back at Luke Spencer (Anthony Geary) as a teen and his doppelganger Bill Eckhart who helped Luke and Patricia Spencer (Dee Wallace) hole up their dad’s body in the walls of the Elm Street house with young Bobbie Spencer (Jaclyn Zeman) being none the wiser and all these years thinking their drunk dad ran away.

Anthony Geary playing the Spencer patriarch Tim Spencer was some of the best acting he’s done in years. To see him telling a young Luke that he will look in the mirror for years and see that he is the same as his drunk violent father was masterful. This almost has you wondering if that’s actually what Tim Spencer looked like or if Luke’s mind has tormented him over this incident so that he sees his face on his drunk, bigoted, violent father’s face.

Jason Thompson as Dr Steve Hardy, Rebecca Herbst as Nurse Jesse Brewer and Ryan Carnes as Dr Phil Brewer were all nicely done. They channeled the more serious tone of the 1960s soaps without coming off campy. And Laura Wright as Lena Eckhart-Spencer was so understated and finely played. She channeled an excusing abused woman perfectly and so differently than we normally see her when she’s playing Carly.

And did you notice that, at some points, the archival type footage flipped back to color and had some color elements? Here’s what we saw and what it might mean:

• Everything from the past was in black and white until adult Luke picked up the baseball bat back in the run down Elm Street house. Once he had the bat in his hand, the flashback of Tim Spencer lying dead showed red blood with all the other colors still muted.

• Then Tracy came into the house and turned on a physical light. Then more metaphorical light was shed as Patricia told him what happened. But it wasn’t until Luke’s alter ego/his father that looks like him screamed that he killed his mother that it all snapped.

• Then all of the memories turned from the black and white of denial, half-truths and botched memories to full color clarity as the bits and pieces of Luke’s fragmented mind came together. Then we saw the scene in full color as teen Luke accidentally killed his mother Lena.

• Then all is flipped back to black and white, symbolizing, Luke’s refusal to accept the truth he now vividly recalls. When his dad said he will see his face looking back in the mirror. That was the point were Luke’s mind fragmented. We saw him hit his dad and vivid red blood splashed.

So now we know what caused Luke’s trauma which leaves us with some questions about both past and future of the Spencer family.

Is Fluke really Tim Spencer? Not actually Tim, but a manifestation of all the worst things in Tim that Luke was terrified of as a young man and we saw in Fluke’s violent behavior. This is my operating theory – it’s not that he has disassociative identity disorder – it’s that he’s manifesting the worst of his father, like a self-fulfilling prophecy where he’s mentally tangled himself up with his father.

What will happen to Luke? He’s on the lam from the law. Even if he’s demonstrably nuts, Luke is dangerous when he’s in Fluke mode. But now that Luke knows what’s what, will he be lucid enough to want to be locked up for the patricide as well as his other Fluke antics? Lulu Spencer (Emme Rylan) will likely call hubby Dante Falconeri (Dominic Zamprogna) to gently take her dad into custody.

Will Luke be sent to Shadybrook? He already escaped once. Based on Luke’s serious mental issues, it’s likely that he will be sent further afield for treatment. Remember Laura Spencer (Genie Francis) went to Europe for extended care. This is likely what will happen to Luke so that Geary can gracefully exit the show with an open door for occasional future appearances. Look to see Geary slip out of Port Charles and into semi-retirement as he deals with real life health issues.

Will Patricia stick around? There’s no official word on how long big Spencer sister Pat is scheduled to appear, but likely long enough to cement her daughter Valerie Spencer (Brytni Sarpi) as a recurring character. There are rumors that Valerie will turn out to be a former flame of Detective Nathan West (Ryan Paevey) which could set her up to further complicate the romantic mess Nathan is in with Maxie Jones (Kirsten Storms) and Damien Spinelli (Bradford Anderson).

Is there more to be learned about the Spencers? There are still some “General Hospital” rumors about this story line that have not come to fruition. For instance, Lulu and Dante were supposed to find something horrifying in a crawl space. Is that where they’ll come across the body of Tim Spencer? Or is there some other interesting stuff hidden there? Also, did you notice the X of tape on the door under the stairs? Is that the crawl space mentioned in rumors?

Will Luke’s mental split affect ELQ? One last notion. Luke had gotten his hands on Skye Quartermaine’s ELQ stock. But with him now clearly non compos mentis, won’t that put any ELQ shares he controls under Tracy’s control as his wife? Crazy people don’t get to vote at board meeting which should make Tracy his proxy and may help fend off Nikolas Cassadine’s (Tyler Christoper) take over bid.

What do you think of the big Luke reveal? Was it what you expected? Is there anything you noticed that was subtle or a hint at things to come? Share your thoughts on today’s anniversary episode below and be sure to check in with CDL for more “General Hospital” spoilers, gossip and casting news every day.