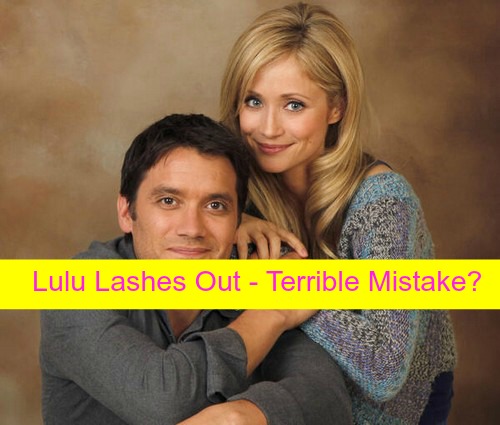 “General Hospital” (GH) spoilers indicate that Lulu Spencer (Emme Rylan) may engage in some extreme antics after her split with Dante Falconeri (Dominic Zamprogna) that will have long-term ramifications and that can’t be undone. What is it that Lulu might do and what could drive her to these extremes beyond Dante’s cheating? Let’s break this down.

If Dante admitted right away to sleeping with Valerie Spencer (Brytni Sarpi) after mistaking the rumpled hotel room as a sign that Lulu and Dillon Quartermaine (Robert Palmer Watkins) had shagged, Lulu still would have been mad. That’s true. But she would have forgiven him because it was her lie that caused the assumptions that Dante acted upon.

Plus, let’s face it – Lulu should not have been staying in a hotel room with her ex, so Dante’s misinterpretation of the situation was understandable – at the time. But with months and months of lies piled on top of the cheating, it’s a seemingly insurmountable breach of faith. The cheating was bad enough, but then the web of lies around it and the missed opportunities to come clean are worse.

There’s also the manner in which Lulu discovered the cheating – for her to be so publicly betrayed, it was absolutely mortifying. If she had found out in private, one on one, from Dante or Valerie or even Dillon, she could have grieved in private. But the public humiliation makes the sting of it all so much worse. And this isn’t even the full extent of Lulu’s damage over this situation.

There’s also the fact that so many people knew about it before Lulu. She’ll find out that Olivia Falconeri (Lisa LoCicero) knew before her and Lulu already knows that Sonny Corinthos (Maurice Benard), Nathan West (Ryan Paevey), Dillon and even intern Andy Plummer (Scott Cooper Ryan) knew before her. It has to feel like a giant conspiracy to Lulu – that everyone knew, should have told, but didn’t.

With all of these hurts festering up and spilling over, there’s no doubt that Lulu will lash out. “General Hospital” spoilers indicate that Lulu will do something, though, that there’s no coming back from. But what? One thing Lulu might do is revenge cheat. Dillon would certainly volunteer, but once Lulu finds out that Dillon intentionally showed that footage in front of the crowd, she won’t like it.

One of the worst things that Lulu could do, if she really wants to hurt Dante, is to pack up baby Rocco and move in with Dillon at the Quartermaine mansion. That would drive Dante absolutely insane. Lulu might even do that to let Dante assume the worst, even if she’s not sleeping with Dillon because he breached her faith. Lulu might see it as a fit punishment to let Dante think that she’s with Dillon.

If not Dillon, Johnny Zacchara (Brandon Barash) would be a likely candidate for a revenge shagging – and he is scheduled to be back in Port Charles, but not until December. Lulu could always pick up a random guy from The Floating Rib. But if Lulu really wanted to wound Dante, sleeping with Morgan Corinthos (Bryan Craig) or Ric Lansing (Rick Hearst) would certainly devastate her husband.

But the worst thing Lulu might do is to mess with their embryo. Could Lulu act in anger and tell Dr Lee to scrap the embryo and tell her they won’t be needing it since her marriage is over? Or might Lulu donate the embryo to another infertile couple? It seems like something to do with their future child would be the surest way to hurt Dante and blow up their future together, but that would be awful.

What do you think Lulu will do in her hurt and anger that could put her marriage with Dante permanently at risk? Share your thoughts in the comments below and sound off on what you think Lulu should do to Dante to get revenge for what he’s done to her. And check back with CDL often for more “General Hospital” spoilers, gossip and more.