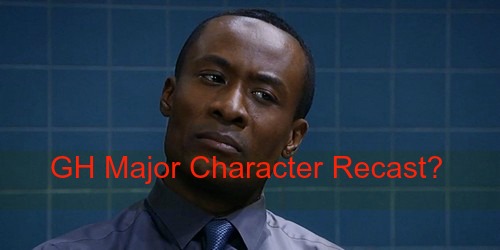 There are a couple of casting rumors swirling that we’ll look at in this “General Hospital” spoilers. First, a male African American actor was screen tested and reportedly had great chemistry with the GH actress he read with, but who could this be? There were rumors that an all-new character was being developed – but another interesting alternative is that this actor would not play a new character, but would step into a recast role.

Who could it be? The most obvious choice is Shawn Butler, previously played by Sean Blakemore. TJ Ashford (Tequan Richmond) is angry at mom Jordan Ashford (Vinessa Antoine) for sending Shawn to Pentonville for mob crimes so he’d be thrilled to have his father-figure back. Of course, unbeknownst to TJ, Shawn is far more than a father figure and is really his biological dad. And Shawn knows the truth, thanks to Jordan’s last-minute confession before he was sent away.

When Shawn was rushed off to Pentonville, it had many fans scratching their heads. Port Charles rarely sees a mob conviction, so how was Shawn convicted and sent off so quickly? It seems like there was something going on behind the scenes that we, as watchers, weren’t privy to. Maybe Sean Blakemore had other projects he needed to work on, maybe Ron Carlivati was cleaning house of people he didn’t like before he left, or maybe it was a disagreement between Blakemore and TPTB.

It seemed strange and out of left field, particularly since General Hospital has a dearth of African American characters. We’re left with Jordan, TJ, Felix DuBois (Marc Samuel) and Valerie Spencer (Brytni Sarpi). And as CDL reported TJ (Tequan Richmond) has a brand new lead role on Showtime and might be leaving GH.

Speaking of Valerie – if the tested actor is a new character rather than a recast, one likely option is the yet-unseen father of Valerie. We don’t know his name or anything about him, so this would be intriguing and Val sure could use family other than the Spencers.

The second recast that’s rumored is Ned Ashton (formerly Wally Kurth). Wally Kurth is very busy over at Days of Our Lives playing Justin Kiriakis, but it looks like Ned is about to be in-demand in Port Charles and that hints at a possible recast. There’s always the possibility they could bring back the first Ned, Kurt McKinney, but that seems like a long shot. If they do bring Ned back, it will likely be a fresh face unless Wally Kurth is planning on commuting between the two soaps (doubtful).

In the next week or so, we’ll see Olivia Falconeri (Lisa LoCicero) working with Tracy Quartermaine (Jane Elliot) on a plot to bring baby Leo back to Port Charles. They have to devise a way to do it on the sly so Julian Jerome (William deVry) won’t know the baby is his. This seems like it’s happening soon since ABC casting is on the search for twin boy babies in the three to six month old range – that must be for Leo Falconeri – there’s no other babies of that gender and age in Port Charles right now.

Currently, little Leo is with Ned and his daughter Brook Lynn, so it makes sense that it would be Ned that brings the baby back to town. Plus, Olivia and Ned have not broken up and the excuse given for Ned remaining out of town is taking care of the baby. With Leo back in Port Charles, there’s no motivation for Ned not to be back in town. Plus, it would be nice to see Ned getting to know little brother Dillon Quartermaine (Robert Palmer Watkins).

As much as I adore Wally Kurth, I feel like Port Charles needs someone to step into the role of Ned to enrich the current and upcoming plotlines. There are changes afoot for the Quartermaines with the Jake as Jason reveal rumored to be November 6 – at the wedding of Jake Doe (Billy Miller) and Liz Webber (Rebecca Herbst). And with Paul Hornsby (Richard Burgi) preying on Tracy and ELQ, she needs her oldest son there to watch her back.

Stay tuned to CDL for more “General Hospital” spoilers and we’ll be sure to post updates once these casting changes are confirmed.