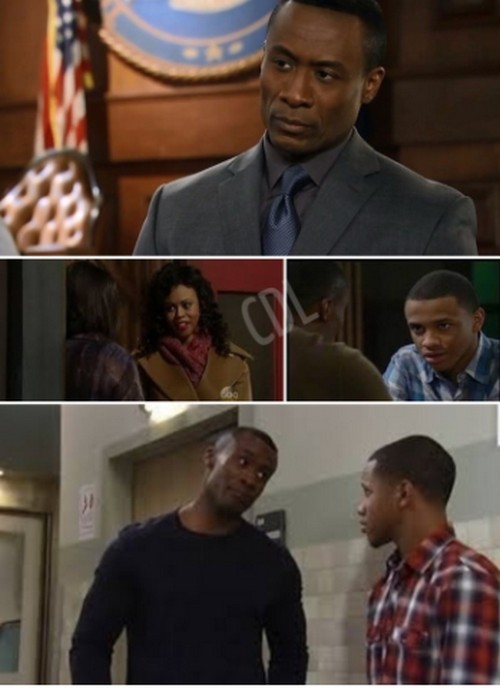 General Hospital spoilers explore the ramifications and possibility of the imminent return to the GH canvas of wrongly imprisoned Shawn Butler. Could General Hospital be bringing back another fan favorite who was let go unexpectedly? The character of Shawn Butler (Sean Blakemore) was sent to prison this past May with fans in an uproar. First of all “Hitman Shawn” makes better BLT’s than he is at being Sonny’s (Maurice Benard) hitman – Shawn never hits his target! He’s the kind of hitman you can’t help but love.

What is amazing is that with all of the mob activity and murders going on in Port Charles Shawn is the one who gets blamed for the attempted murder of Hayden Barnes (Rebecca Budig). PC police department did not do bullet forensics because Shawn pled guilty to the crime before he had to testify against his boss, Sonny Corithos who is the number 1 target of the PC D.A.

The exit of Blakemore caused social media stir because just as his storyline started to finally come full circle with TJ (Tequan Richmond) being his son – sadly Carlivati threw Shawn in prison and storyline died.

Shawn being TJ’s father has always been suspected by the sharp GH viewers so when TPTB brought in TJ’s mother Jordan Ashford (Vinessa Antoine) viewers just knew they were going to find out the deep dark secret. But instead Ron Carlivati took the story line South, giving us a tiny fizzle reveal that yes indeed Shawn was TJ’s real father, it was like watching the Fluke is Luke reveal all over again – viewers just continued to wait with bated breath for the fall out but it never happened. Shawn found out he was the biological father of a boy he has raised most of his life and then bam he goes to prison. CDL thinks there is way too much story left with Shawn, TJ and Jordan. TJ reacted in a negative way when he found out his mother was not a drug runner but in fact DEA.

Jordan can be added to the list for worst mother, hypocrite and straight up rat in the GH hall of shame because she leaves her son (whom she claims to love so much) for years with known mob affiliate Shawn then ends up turning her lover and TJ’s father in for what she thinks was the attempted murder of Hayden. New Commissioner Jordan Ashford now wants her son TJ, who lives with Sonny, out of harm’s way as the Mob War heats up – and is dead set on bringing Corinthos down – yet she knew TJ grew up around Corinthos. Where was Jordan when T.J. lived with Shawn all of those years? Why was the mob good enough then for her son but now she’s cleaning up crime? The biggest crime here is her BIG FAT LIE that she has continued to live with her son TJ about his “dad” accidentally being shot by his bestfriend military buddy Shawn – even back then Shawn was a terrible shot.

As you can see CDL’ers there is plenty of story to be told and maybe GH is heading in that direction with the fact that Elizabeth (Rebecca Herbst) now knows Nikolas tried to have Hayden shot and that it was in fact Nikolas’s henchman who shot that paralyzing bullet – not Shawn! Will Elizabeth ever do the right thing? If Elizabeth makes an anonymous call it could at least get the PCPD to run a forensic test that could easily free Shawn – bringing him back into our livingroom and get an amazing storyline going with these awesome characters and actors! Let’s hope part of the positive turnaround with the new writers will also come with fan favorites returning and storyline loose ends being tied up!

Two other factors could work in well with a Shawn return: 1) as the GC Mob War heats up Sonny will need all the help he can get – and who better than brave and sensible Shawn to have his back? 2) there have been rumors that TJ will be injured, perhaps seriously, as Sonny’s enemies (led by Carlos Rivera?) try to put the Corinthos crime family out of business – what better time to have an outraged Shawn released from the pen to help Sonny seek revenge?

Let’s continue to watch as GH is heading down a different writing path. What do you think CDL’ers do you miss Shawn as Sonny’s right hand man? Would you like to see TJ’s reaction when he finds out Shawn is in fact his real father?

Please leave your thoughts and comments in the CDL comments below