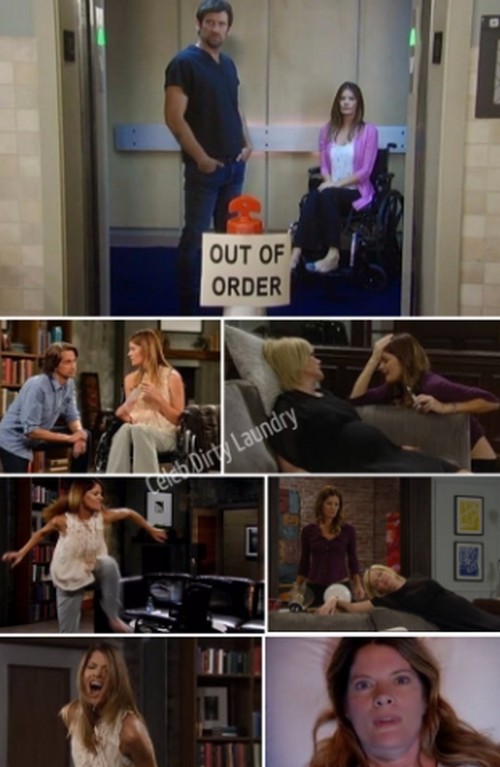 General Hospital spoilers look at Nina Clay’s character evolution and what the new GH writers might do to improve her storyline. When Michelle Stafford originated the role of Nina Clay in 2014 GH fans waited with bated breath knowing what an exceptional actress Stafford was from her previous run at Y&R. With failing ratings GH needed some juice and fans thought they would get it with the new character of Nina Clay – how could they go wrong Nina’s wicked step mother was being played by soap legend Donna Mills! When we first saw Nina in May 2014 she was comatose – ironic that her character of Phyllis on the Y&R was also in a coma when she left the show. Nina Clay was the wife of Dr. Silas Clay (Micheal Easton). When Nina woke up it did not take long for her to get her “atrophied legs” up and in a wheel chair headed towards Port Charles.

When the character of Nina was introduced she was a lying, manipulative, angry and obsessed character. She came to town with a “nurse” who was in on the big scam – Nurse Rosalie (Linda Elen Tovar) was being paid nicely and blackmailed by Nina. Real nice lady eh? Shortly after Nina hit Port Chuck she was able to get out of her wheel chair and stretch a little when of course no one but Rosalie was around. The wheel chair had an abused life of it’s own as it was kicked and thrown numerous times a week (I wonder how many wheel chairs they replaced).

Nina’s anger was scary – she had arrived in Port Charles months earlier thrashing Silas’s apartment when no one knew she was already out of her coma and was stalking Silas. Nina made a hit list that included Sam, Kiki (Hayley Erin) and her mother on it. Nina came to town with revenge on her mind and she wanted everyone in Silas’s life gone – she wanted him to herself. Nina even stooped so low as to blackmail Silas’s teenage nephew Rafe (Jimmy Deshler) who she knew had a drug problem – holding it over his head promising if he left town she wouldn’t tell Silas. Nina basically bought his final dose of heroine which inadvertently killed him. The worst part was when Nina ended up at the hospital next to dying Rafe’s bed to make sure he was not waking up to tell the story. Rafe ended up dying.

Even though Nina did not pull the plug on Rafe she was still responsible in some way for his death – this is another storyline that did not get tied up with the recent unexpected death of Silas Clay – he would have liked to know that info about his ex wife. I guess GH fans are suppose to forget that minor storyline hiccup… along with several others.

The manipulative Nina that we were first introduced to got Patrick Drake (Jason Thompson) fired – with her diabolical wheels turning in her head she made it it look like Silas Clay leaked information about Patrick Drake questioning himself as a brain surgeon on whether to save the person responsible for his premature baby’s death – which was Rafe Kovich Jr. Sam and Silas were talking on the Hospital roof top and Nina had to get out of her wheel chair to get to the spot that she could hear Sam and Silas talking about what Patrick told Sam. Nina leaked the info on what she heard to the media getting Patrick Drake fired from General Hospital and for a double whammy she put doubt in Sam’s head about Silas leaking the info – starting the cracks in their relationship. While Silas and Sam are having major problems all thanks to Nina, back at Silas’s pad Nina drugs Silas and crawls into bed with him in an attempt to get pregnant – of course a soap opera wouldn’t be a soap if Sam didn’t walk in on them!

The point of all of this is the writers have Nina flip flopping week to week almost as if she is bipolar or a split personality.

Nina then goes to child-like mode as if she cannot think for herself and is some weak little wounded bird but before you know it she is diabolical again – taking a 9 month pregnant Ava hostage, torturing her, shooting her up with meds that cause temporary paralysis and then kidnapping the kid. When Franco (Roger Howarth) is the sane one in the relationship there is a problem. Nina is very compulsive – her latest incident is marrying Ric Lansing (Rick Hearst) to make Franco jealous and also lashing out at Franco for not believing she was innocent of the baby Avery kidnapping.

Why would anyone think she was innocent she has manipulated her way through PC since she arrived and has kidnapped a baby before – and even torturing the mother (Tasmanian devil but still a mother).
The latest storyline where Ric and Madeline (Donna Mills) trying to push Nina over the edge with a crying baby etc. is ludicrous. The Nina Clay who came to town would never have fallen for that crap let alone marry Lansing on a whim when she is worth millions and she knows it. Nina was suspicious of everyone before – now we are to believe she is that easily pushed off the deep end?

The character of Nina had great potential when she came and fans love her scenes with Franco and frankly these two are the best part of GH these days – but it is hard to bond with a character who seems to be a different person every week. Nina seemed solid and very diabolical when she came to town but now she is all over the place acting like some naive innocent, letting Lansing run her life AGAIN. This is NOT the Nina Clay who came to town. The Nina that we grew to know would give Ric Lansing a run for his money, after all she was raised by the queen bitch manipulator Madeline Reeves.

Nina is at her best when she is conniving and on point with her trusty sidekick, the joker Franco. The weak child-like Nina is very boring and actually makes you want to shake her out of it and even yell at the TV screen “Come on Nina you are smarter than this!” We can actually compare the annoyance we feel about Nina’s flip-flop character to Ava/Denise’s bad wig – “TEAR IT OFF – we all know it’s Ava!” The same goes for Nina Clay  – we all know she is not a victim but one who victimizes – so come on, bring the real Nina back!

Let’s hope after the  Ron Carlivati carnage is over the new writers can give Nina Clay a storyline we can all sink our teeth into. What do you think CDL’ers do you think Nina Clay deserves more of a solid storyline? Please leave your thoughts and comments in the CDL comments below.