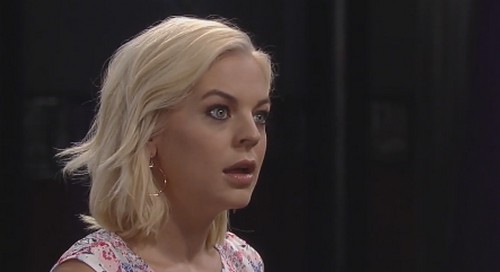 Here are some “General Hospital” spoilers for the Tuesday September 1 GH episode so you can what happens next. The Silas Clay murder mystery is solved! Kiki Jerome (Hayley Erin) hasn’t heard yet that Madeline Reeves (Donna Mills) killed her dad Silas Clay (Michael Easton), but she’ll know soon enough. And even though Morgan Corinthos (Bryan Craig) didn’t off Silas, Kiki is so done with him. Today, Kiki will go see her mom Ava Jerome (Maura West) in jail and tell her that she knows all about her sleeping with Morgan.

How will Ava react? Ava knows she’s been busted, so lying isn’t an option. Maybe Ava will play the love card or the “I came back from death to be with you” card. Kiki isn’t having it. Is she willing to cut off one of the last relatives she has over this heart break? Don’t expect a warm mother-daughter reunion at the PCPD today. That leaves Kiki with just her Uncle Julian and Grandma Delia.

Morgan is reeling and meets up with Michael Quartermaine (Chad Duell) at the MetroCourt to seek some brotherly advice. Morgan will tell Michael that Kiki dumped him – and why she did. Michael is on the same page as his parents and thinks Morgan is heading down a bipolar path. Michael will try to talk reason to Morgan and let him know he can go on without Kiki or Ava.

Is there a chance that Morgan will go running back to Ava now that Kiki is done with him? Hmm… And, it turns out, Alexis Davis (Nancy Lee Grahn) overheard Julian Jerome (William deVry) talking to his sister Ava at the jail when Julian went to break the bad news that he couldn’t steal the Connie Falconeri murder evidence. Alexis tells Julian she heard him saying he was sorry to his sister.

Alexis wants to know why. Will Julian come clean to Alexis about the evidence he was trying to nab? Alexis won’t like to hear that Julian was planning on stealing evidence which could have landed him in hot water if he was caught. Also, side note, Nancy Lee Grahn is taking a break to go to Ireland with her daughter. We won’t notice her absence for six or eight weeks, but just an FYI.

After Alexis drops Nina Clay (Michelle Stafford) back at the lock up, Franco (Roger Howarth) stuns Nina with the news that the cops got a murder confession in the Silas murder case. Franco fills Nina in on rat fink Ric Lansing (Rick Hearst) wire tap and the bigger news that her mom Madeline is who killed her ex-hubby. Nina will be stunned but Franco is there for his lady love.

So when will the PCPD cut Nina and Franco loose and what will they do from here? Maxie Jones (Kirsten Storms) heads to the PCPD to tell Nathan West (Ryan Paevey) the big news that she landed a lead role in Dillon Quartermaine’s (Robert Palmer Watkins) movie. But then Maxie gets distracted by the news that Nathan had to arrest his mother/aunt Maddy.

Maxie is secretly thrilled when she finds out Madeline is headed for Pentonville again. Maxie goes off on Maddy about killing poor Silas over money and really lets her have it with both barrels. Nathan is similarly disgusted with his mother and simultaneously worried about his sister. Will Nathan take a closer look at the financial papers and realize that Ric was trying to steal from his big sister?

Sonny Corinthos (Maurice Benard) and Carly Corinthos (Laura Wright) are very worried about Morgan’s mental health and they talk about how much they love their kids. Carly is excited about officially becoming baby Avery’s mom. Sonny sweetly tells Carly that she’s the perfect woman for him and he can’t wait to be married to her again.

Watch today and then head back to CDL for more “General Hospital” spoilers, news and gossip.