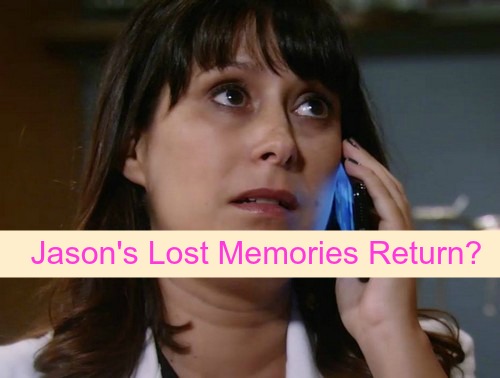 “General Hospital” (GH) spoilers indicate that Robin Scorpio (Kimberly McCullough) will be back on the scene in Port Charles soon. Her first appearance was Friday, November 13 when Patrick Drake (Jason Thompson) calls to tell her that Jake Doe is really Jason Morgan (Billy Miller) – but there’s a good chance that Robin already knows this.

Last we heard from Robin, she was in Paris ostensibly being held by Helena Cassadine (Constance Towers) – although last we saw Helena, she was in exile on Cassadine Island.

The looming question is whether Robin can cure Jason and get his Morgan/Quartermaine memories back. Of course as we know one of the people holding Robin will grab Emma in the park while a freaked-out Robin watches all of this on video from the lab where she’s being held. This threatening of Robin’s child will force her to promise to keep her mouth shut about Jason. Still we doubt this threat will hold Robin back forever.

If you recall, Robin has restored Jason’s brain many times before with miracle neurological medicine that she developed. Back in 2005, Jason developed a debilitating neural disorder that was caused by the car wreck years earlier that left him with brain trauma, seizures, and then amnesia.

Robin treated him with an experimental drug that restored his memories but caused a brain aneurysm. He was going to die as a result, but Sam Morgan (Kelly Monaco) convinced him to let Robin and Patrick operate.

That surgery saved his life. Then after another car wreck in 2011, Jason had to have surgery but developed complications because a chunk of the dashboard from his first big car accident (that turned him from Jason Quartermaine into Jason Morgan) was causing seizures in his frontal lobe.

Jason had to have another surgery to dig out the piece of the car but that surgery ended up causing a cerebral edema that was making him increasingly violent and causing memory lapses.

Robin developed another medication to restore his brain and Jason needed that along with yet another surgery. Robin supposedly died but Patrick went ahead and did life-saving surgery and administered Robin’s drug therapy to fully restore Jason.

Patrick knows that it’s likely that Robin could help Jason once again with her miracle meds, but would Patrick bring that up? If Jason gets all his memories back, Patrick knows 100% that Sam would be back in his arms ASAP.

But then again, Patrick is a decent guy, so he may suggest that he and Robin try another round of surgery and meds to see if they can bring him back even though it would mean Patrick and Sam would definitely be over.

And even if Patrick doesn’t broach the subject, Robin will likely bring it up. Could Robin know about the microchip that Helena put in and could Robin know how to reverse the damage that the chip did so she can restore his memories?

It seems like the last thing Jason’s brain needs is another surgery, but it might be his only way back. In fact, since we know Jason portrayer Billy Miller is taking time off at year’s end, could the plan be for Jason to fly to Paris for extensive treatment with Robin to try and restore his memories?

Either way, it seems like it’s always Robin that brings Jason’s bring back to normal when he has a medical crisis – will she step up to save Jason once again despite the threats against Emma?

Be sure to check back with CDL often for more “General Hospital” spoilers on Jason, Robin, Patrick, Liz and Sam – and all their shared drama.