General Hospital (GH) Spoilers: Robin Returns, Gets Sonny Out of the Wheelchair – Has a Mystery Partner? 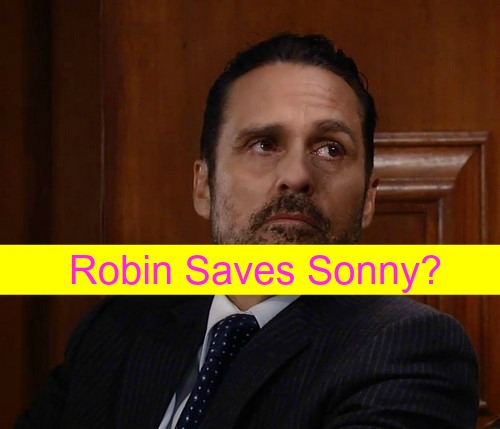 “General Hospital” (GH) spoilers indicate that Robin Scorpio (Kimberly McCullough) will be back for a few episodes although we won’t see her in Port Charles right away. After the #JasonRevealed drama unfolds on Monday and into Tuesday, Patrick Drake (Jason Thompson) will run to phone Robin since she is close to Jason/Jake Doe (Billy Miller) and has a long history with him.

Patrick will fill Robin in on Jason’s return and Robin will fill Patrick on any other info she has about Jason, but is there more to this revived Robin storyline than just the phone call? Of course there is.

GH showrunners are setting the stage for Patrick’s exit and he may run back to Robin – at least for companionship and as a co-parent of Emma Drake (Brooklyn Rae Silzer) – but could Robin have some run-ins with other Port Charles denizens? And could she lend a helping hand to Sonny Corinthos (Maurice Benard) in his time of need?

“General Hospital” spoilers indicate that Epiphany Johnson (Sonya Eddy) will soon take charge of Sonny’s rehab, but could Robin also be involved? Could it be Robin’s miracle-level medical expertise that gets the mob boss back on his feet?

If Robin can revive Jason from near/certain death, what’s the big deal with healing a paralytic mobster? Robin will be back in the GH landscape for a short stint with her first appearance on Friday the 13. Kimberly did mention when she discussed her return that someone might be holding her hostage, but this could have been a joke since she seems to always be held against her will – usually by a Cassadine or someone Cassadine-adjacent.

And – side note – wouldn’t it be out of absolute left field if Robin was the mystery partner working with Hayden Barnes (Rebecca Budig) to take down the Cassadines?

What we do know is that Kimberly mentioned that she only shot one day of work so far and she did not come into contact with her on-screen mom Anna Devane (Finola Hughes) but she did mention that she would be a terrible parent to not see daughter Emma.

Although, arguably, Robin has been a pretty terrible parent to Emma for years running, so it would not be hard to imagine that she would not see or talk to her kid during this appearance. Longer-term “General Hospital” rumors mention that Robin might work with both Anna and Robert Scorpio (Tristan Rogers) during his brief December return.

There was talk that the three of them may save a life. The bottom line is – it looks like Robin’s November sweeps visit may be brief and we know only of the 11/13 appearance so far. However, Sonny will get a visitor on Friday, November 20th to help with his recovery.

What we don’t know is if this will be when tough-but-loving Epiphany comes to kick Sonny’s butt in rehab or if Robin might also be involved. After all, one day of shooting for Kimberly could turn into multiple episodic appearances – fingers crossed that the showrunners got their money’s worth out of the one day shoot and we will see her several times.

Be sure to stay tuned to CDL for more “General Hospital” spoilers, news and gossip – every day!