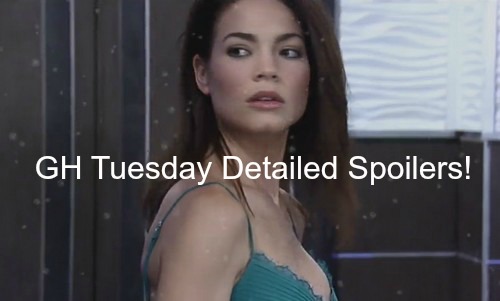 “General Hospital” (GH) spoilers tease that the day of reckoning has come for both Sabrina and Paul in not-to-miss Gala showdowns. Here are the GH spoilers you need for the December 22 episode of “General Hospital.”

Armed with due date details from Monica Quartermaine (Leslie Charleson), Michael Quartermaine (Chad Duell) goes to confront Sabrina Santiago (Teresa Castillo). Michael demands to know who the father of her baby is, because he knows it’s not him.

Will Sabrina explain she let him assume it was his baby because Carlos Rivera (Jeffrey Vincent Parise) is not a good parental option? Or will Sabrina just tell him she’s sorry and wanted it to be his child and not mention that the child is hers with Carlos?

Also facing the music is Paul Hornsby (Richard Burgi). He was so excited to skip out of the Gala and go meet Ava Jerome (Maura West) that he didn’t notice that Dillon Quartermaine (Robert Palmer Watkins) overheard him mention the hotel room number.

Paul heads upstairs and finds Ava ready to go and so he takes her to bed. But later, Dillon tells Tracy Quartermaine (Jane Elliot) that his dad is planning a big surprise for her upstairs. Tracy gets the room key from a MetroCourt employee and heads upstairs.

Wow will she be shocked to find Paul, the crime-fighting DA, in bed with Ava, Port Charles’ reigning mob mistress. Tracy will be confronted with the painfully obvious evidence that Paul doesn’t care about her and is working an agenda she doesn’t know about.

Patrick Drake (Jason Thompson) goes to find Robin’s body and he’s stunned by what he sees in the Cassadine crypt. It looks just like the picture Jerry showed them. Robin is covered in blood and looks to be dead.

But when Patrick holds her close and mourns her loss, he’ll kiss her and then Robin wakes just like out of a fairy tale and it looks like this may be the beginning of their fairy tale ending. Patrick is thrilled to find out Robin still loves him and is alive.

Back in Port Charles, Carly Corinthos (Laura Wright) is far from done with Liz Webber (Rebecca Herbst). Carly tells Liz that Jason Morgan (Billy Miller) will never be hers and will rip into Liz again in public. Will Franco (Roger Howarth) come to her rescue? Will Jason?

Sam Morgan (Kelly Monaco) tries to spark something with Jason out on the MetroCourt balcony. She tells him she loves him but he has to be honest that even though he knows he had a life with her and they were married, he doesn’t remember it.

Julian Jerome (William deVry) and Alexis Davis (Nancy Lee Grahn) will announce their engagement and she gets to show off her ring. Also, Dillon introduces India Arie for her Gala performance, oblivious to how wrecked his mom will be and that he led her into that mess.

Also, the Gala seems to be a big hit for the Crimson gang – if they put all the photos out on social media plus the new magazine spread, it looks like Maxie Jones (Kirsten Storms) and Nina Clay (Michelle Stafford) proved their worth. Too bad that’s not what Julian wanted.

Don’t forget there are new shows all the way through Thursday, December 24 this week. Be sure to watch every day and check back with CDL often for more “General Hospital” spoilers and news.