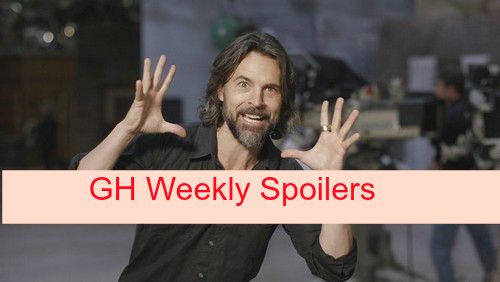 Check out these weekly “General Hospital” spoilers for Monday September 28 through Friday October 2. This week in Port Charles, rarely seen characters are back and more mob madness. Kiki Jerome (Hayley Erin) is finally back is not looking good. Ava Jerome’s (Maura West) cheating with Morgan Corinthos (Bryan Craig) and Silas Clay’s (Michael Easton) death hit her hard and Kiki is falling apart. Franco (Roger Howarth) shows up to help and says he’s sorry he hasn’t been around more. Kiki will let Franco comfort her since she has no one left.

Franco is also moving forward with Nina Clay (Michelle Stafford) who is much less of a mess now that she has an annulment from rat fink Ric Lansing (Rick Hearst). Nina wants to put the messy past behind her and move on and enjoy a happily-ever-after with Franco. But are they ready to let go of any desire for revenge?

Also back in the plot are Nikolas Cassadine (Tyler Christopher) and Hayden Barnes (Rebecca Budig). They talk about the volatile past they shared that Hayden is only starting to remember and Nik wonders if he can trust Hayden with his dirty laundry. Hayden will eavesdrop on a revealing private conversation. What secrets of Nik’s will Hayden discover?

Sam Morgan (Kelly Monaco) and Jake Doe (Billy Miller) got talked into a vow renewal at Noodle Buddha when the near-blind owner mistakes Jake for Jason. Strangely, they agree to fake I do’s and then Jake has to kiss Sam under pressure from the Chinese eatery owners. What memories will this invoke with Jake? Doesn’t matter, he’s still clueless – at least for now… but not for long!

The faux wedding may help Sam accept Patrick Drake’s (Jason Thompson) proposal that he frets was precipitous and could ruin their relationship. Later this week, Patrick and Sam get an unexpected visitor – but is the person knocking at their door friend or foe? Is it a blast from the past? And what will this mean for Sam, Patrick and Jake?

Sam has some interactions with Anna Devane (Finola Hughes) this week. Anna wants Sam to start up a PI business with her. With the Jackal gone, Sam likes the idea and agrees to set up shop with the ex-mother in law of her fiancé. Weird, huh? Anna also has business with Julian Jerome (William deVry) and Alexis Davis (Nancy Lee Grahn) this week.

Anna wants to know if Alexis really buys Julian’s claims of being done with the mob and she demands answers from Julian about Duke Lavery’s (Ian Buchanan) shooting. Julian will stick with the party line about Carlos Rivera (Jeffrey Vincent Parise) acting outside of orders. Anna doesn’t buy it, but also can’t prove it.

Paul Hornsby (Richard Burgi) shakes up Anna with news of a recent development. Does this have to do with Carlos? Anna is shocked and it looks like Paul is focused on Anna for some reason. Is Paul worried she might figure out his mob involvement and could this put her in danger? Paul asks Nathan West (Ryan Paevey) for some history on the wily Brit.

Michael Quartermaine (Chad Duell) proves he’s a true Corinthos at the meeting of the five families – he even says he’s “Michael Corinthos” not Quartermaine. When Ava Jerome (Maura West) names Carlos the shooter, Mikey is skeptical and later threatens Ava to stay away from his family and their territory, but we know she won’t.

Carly Corinthos (Laura Wright) ties the knot with Sonny Corinthos (Maurice Benard) in a bedside ceremony to try and block Ava getting custody of Avery. Carly later gets some news that scares her and she makes Michael and Morgan promise not to get in too deep with the Corinthos syndicate. They promise, but that won’t stick. The brothers will unite to run their dad’s mob.

Ava fills Julian in on the five families meeting and tell him she tried to protect him by naming Carlos. He says he’s going to find the real shooter but Ava already knows it was Paul. Ava wants to focus on getting Avery back and she ends up in a major confrontation with Carly over the little girl. Could Ava’s renewed involvement with the mob cost her custody of her daughter?

Maxie Jones (Kirsten Storms) will reassure Nathan West (Ryan Paevey) that his concern about her working on Dillon Quartermaine’s (Robert Palmer Watkins) movie is misplaced. They renew their romance and get all mushy this week. Lulu Spencer (Emme Rylan) confides in Dillon she’s concerned about Dante Falconeri (Dominic Zamprogna) in the wake of the shooting.

Dante is worried about his dad and Valerie Spencer (Brytni Sarpi) is there to comfort him. Does she think the baby news will make him feel better – or will Valerie put off telling him about her pregnancy until he’s stronger and can stand the shock? Nathan sees them talking and advises Val to get over Dante before they both get hurt, but she just can’t.

Dillon’s movie starts shooting but drama shakes things up – Dillon talks to Maxie about his concerns and he may tell her that he wrote the screenplay about Lulu. Dillon has a more serious conversation with his pretend GF Valerie. Will these two admit they have feelings for the Falconeris and not for each other?

Look to CDL for daily “General Hospital” spoilers with tons of juicy details plus lots more GH news and gossip.