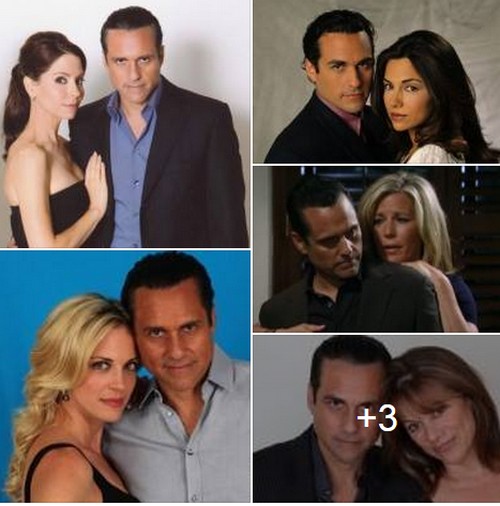 In this “General Hospital” spoilers, we take a look at Sonny Corinthos (Maurice Benard), the ultimate Latin lover, and his past romances as he tries to say “I Do” once again with Carly Corinthos Jax (Laura Wright) in a hospital ceremony that’s more about protecting his daughter Avery than the wedding they envisioned.

Sonny is at a crossroads in his life like we’ve never seen before – he’s grievously wounded, his oldest son Michael Quartermaine (Chad Duell) has taken over the family business, he’s weak, unknown enemies are circling, and he’s without his best friend Jason Morgan (Billy Miller) – at least as far as he knows.

These are the circumstances that leave you questioning your life choices. Sonny will get married to Carly again, so it’s a fait accompli, but also a good time to reflect on his past relationships. Here’s a look at some of Sonny’s most significant relationships in recent history and then a poll so you can vote on who you most like seeing in Sonny’s life.

Olivia Falconeri (Lisa LoCicero): Sonny and Olivia were high school sweethearts back in Bensonhurst. They broke it off and Sonny pursued her cousin, not realizing that, at 15, Olivia was pregnant with his child. Olivia raised Dante Falconeri (Dominic Zamprogna) without telling Sonny about their son. Back in Port Charles, and after Dante was revealed to be Sonny’s offspring, Olivia and Sonny had another shot at love, but her cousin again proved to be an obstacle. Connie’s death left them both available and they reunited, only to be torn apart by Sonny’s dalliance with Ava. Do Sonny and Olivia belong together? They share a long history, a son and a grandchild, and are both very family-centric. Plus they have a rich history.

Connie Falconeri/Kate Howard (Kelly Sullivan): Connie has been troubled since she was a teen and maybe her wildness is what lured Sonny in back then, and again years later. Connie was the “one who got away” for Sonny as she ditched him on the eve they planned to run off and elope. Sonny’s affection for Connie bordered on the obsessive and he even gave up his syndicate to be with her – something he hasn’t been willing to seriously do for any other woman. But the mob hiatus didn’t last and the two broke up and moved on to others. Both Connie and Sonny shared struggles with mental illness and that instability may have been responsible for some of their undying passion for each other. If Connie had lived, would they still be together?

Brenda Barrett (Vanessa Marcil): Brenda is another that Sonny seemed to think was the love of his life and that he was involved with on and off for years. Interestingly, like Carly, Brenda was another of Sonny’s loves for which Jasper Jax (Ingo Rademacher) was a rival. Brenda also wanted Sonny out of the mob and their romance was further complicated by Carly’s ongoing attempts to sabotage Brenda’s chance at happiness with anyone. And last we saw Sonny and Brenda together, they did not break up, but only admitted that their timing was off in that moment. They shared a last kiss that looked more like a promise for the future. Brenda will never accept Sonny’s mob lifestyle, but could they work if Sonny was out of the business?

Carly Corinthos (Laura Wright): Carly and Sonny have a tempestuous history that brings them apart and back together, often destructively, and usually hurting other people. They’ve been married three times before with the last one a ceremony Sonny tricked Carly into because he refused to give her up. Carly’s tolerance of Sonny’s mob lifestyle and her willingness to do absolutely anything to be with him are selling points of this relationship. Carly will knock down anyone (Brenda, Jax, Franco, etc.) to get to Sonny when she decides she wants him in her life. She also loves his children – those she birthed and otherwise. Could Sonny and Carly finally be together forever after this marriage, or is their future murkier?

Sam McCall Morgan (Kelly Monaco): In a way, Sam and Sonny were a prime pairing since Sam also has a history of being on the wrong side of the law and is tolerant of mob men. If you’re willing to look past a man taking you hostage and sleep with him anyway, is that a sign of fate wanting you together or just phenomenally bad judgment? This is not a pairing that seems meant to be, though, since Sam is obviously much more deeply attached to Jason Morgan (Billy Miller) than she ever was to Sonny. But if Sam and Sonny’s daughter had lived, perhaps things would have gone differently for them. If Carly hadn’t stepped back into Sonny’s life while Sam was pregnant, could it have worked out between the two of them?

Alexis Davis (Nancy Lee Grahn): Sonny must be the most fertile man in the history of soaps since his one time with Alexis resulted in her pregnancy. Or perhaps Alexis’ ovaries just like bad guys since she also got pregnant by Julian Jerome (William deVry) after a one-off shag. And with Alexis, as with Sam and Brenda, Carly’s interference short-circuited the relationship. What could have happened if Carly had really died in the car accident and not just been playing possum? Would Alexis and Sonny have made it as a couple? Based on Alexis’ relationship with Julian, it seems very likely that Alexis could have mixed romance and business and remained by Sonny’s side as his baby mama, lawyer, and lover. Wouldn’t that have been something?

Ava Jerome (Maura West): Sonny and Ava seem to be a match made in hell, but they sure had a spark, didn’t they? This was another woman he knocked up instantly and proves that Sonny loves self-destructive sexual encounters. Ava is pure poison to Sonny – as she is to his son Morgan Corinthos (Bryan Craig) – and took advantage of the mental instability of both. Remember Ava actively encouraged Sonny to quit his meds and then leveraged his grief into a sexual encounter that resulted in her pregnancy. Ava just loves those Corinthos men… What’s fascinating about the Sonny and Ava pairing is that if they ever did couple seriously, they would be unstoppable. They love family, are power hungry, and volatile. Sexy combination…

Ignoring the fact that Carly and Sonny will tie the knot again this week (or attempt to… we don’t want to give everything away!), which of Sonny’s lovers do you think is the sexiest pairing? The most genuine? Which one is his real, true love? Vote in our poll below for which of Sonny’s lovers you prefer. Vote, then share your thoughts in the comments below!