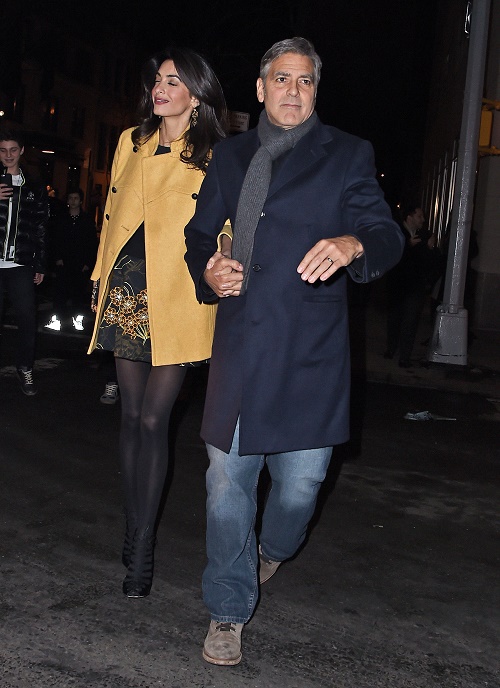 George Clooney and Amal Alamuddin have been on the verge of a divorce, basically since they tied the knot and said “I Do” during their lavish November 2014 wedding in Italy. But it looks like George Clooney is finally “shaping up” and trying to meet Amal’s nearly impossible standards and expectations in a desperate attempt to save their marriage. It’s no secret that Amal put George Clooney on a strict diet because she was concerned about his age and unhealthy eating habits combined with his drinking binges. Although at first George was rebelling against his wife – he is apparently finally falling in to line.

According to E! News, George Clooney, Amal Alamuddin, and his mother Nina went on a family outing to Pasty’s Italian Restaurant in New York City this week. George’s mother Nina and wife Amal snacked on carb-loaded bread while they were waiting for their orders, but George fought the urges. He informed the wait staff that he was on a diet. While Nina and Amal dined on shrimp scampi and penne pasta with zesty marinara sauce – George opted to order a green salad as an appetizer and then another chicken salad as his main course.

So, it looks like Amal Alamuddin has finally broken George’s spirit – and he is following her strict diet. He also hasn’t been spotted out pounding tequila shots recently, which was another one of the items Amal put on the “No No List.” Then again, George could have just been putting on a show for his wife, and stopped by the nearest fast food drive-thru as soon as she headed back to work or left town for another month.

What do you think of Amal Alamuddin putting George Clooney on a diet? Is she truly concerned about his health – or just a control freak? Do you think George will be able to follow all of his wife’s rules, or is it only a matter o time before he grows tired of being bossed around and gets a divorce? Let us know what you think in the comments below!