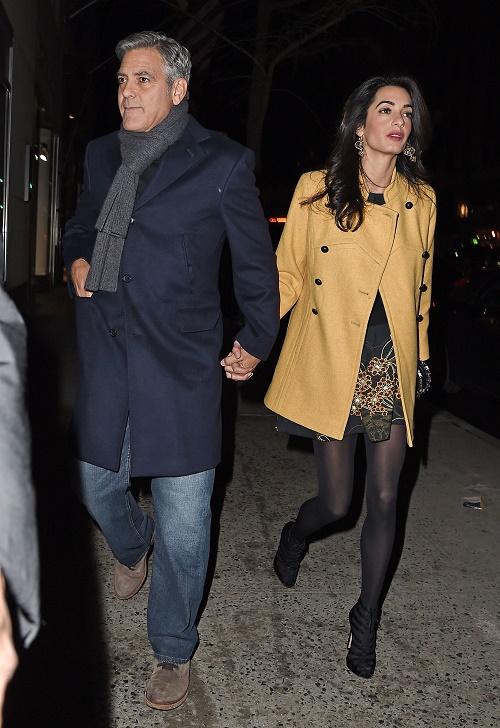 George Clooney and Amal Alamuddin are getting a divorce – it isn’t a question of “if” they will end their four month marriage – but more a question of “when.” When George Clooney wed human rights attorney Amal Alamuddin in November 2014, the world was shocked because the couple had literally nothing in common and Amal despised the Hollywood scene. Now, Amal is starting to realize what we knew all along – George Clooney is never going to give up his A-List status in Hollywood and celebrity pals to follow her and her career around the globe.

Just when Amal Alamuddin thought she couldn’t hate Hollywood any more – George Clooney’s first wife Talia Balsam is sharing all of her and George’s dirty secrets on a tell-all TV show set to air on HBO. According to the March 23rd edition of OK! Magazine, “The names have been changed to protect the innocent, but the story of George Clooney’s first marriage is headed to the small screen – courtesy of his first wife Talia Balsam. Talia Balsam, who split from George in 1993, just before he got famous, will star on Sarah Jessica Parker’s upcoming HBO show, titled “Divorce,” and she has been feeding the writers dirt about her own break-up from George.”

If there was any chance that Amal Alamuddin and George Clooney could save their marriage and avoid a divorce – it just went out the window. Amal Alamuddin hates Hollywood and the women that George dated before her. George’s ex-wife starring in a TV show about their marriage and divorce is going to be the proverbial “final straw” for Amal. She thinks that she is above Hollywood and desperately wants George Clooney to be as well – but a “tell all” TV show screams trashy Hollywood drama. Hey, maybe Amal could use her extensive law degrees to shut the project down before she is thoroughly embarrassed by her husband’s old escapades.

Do you think that Amal Alamuddin and George Clooney will survive 2015 without filing for divorce? Is Amal being ridiculous by expecting George Clooney to disassociate himself from Hollywood? How will she react when Talia Balsam’s TV show about her and George hits the small screen? Let us know what you think in the comments below!