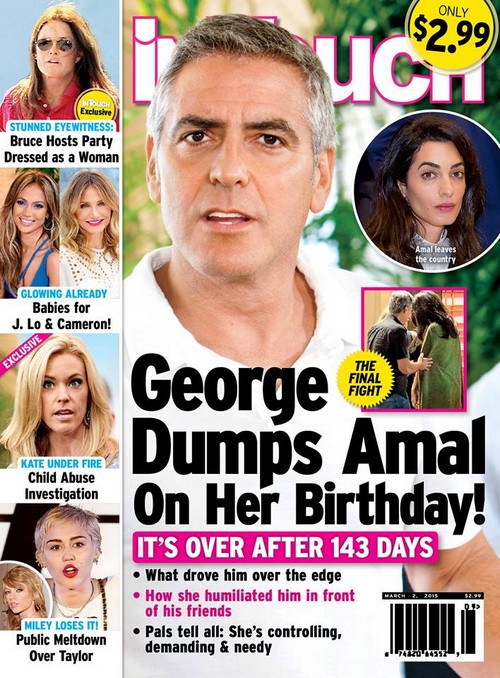 George Clooney and Amal Alamuddin have only been married a short few months, but sources close to the couple say that George and Amal are getting a divorce. The latest cover issue of In Touch goes into detail about what led to divorce decision, including their final blowout fight on Amal’s birthday. Apparently, George Clooney ‘dumped’ Amal Alamuddin on her birthday, 143 days after they got married.

Hey, 143 days is a heck lot longer than most couples in Hollywood last. However, In Touch’s sources explain that George was the one who pulled the trigger on their marriage, largely because Amal was ‘humiliating’ him in front of his friends, i.e. she probably corrected some of his dumber friends in their grammar and/or political knowledge. Finally, George’s friends supposedly added that Amal was controlling, needy, and demanding, much more so than George’s previous girlfriends. Obviously, George Clooney has a ticking clock on every single one of his relationships, but many people thought that his marriage situation with Amal would be different. Alas, it’s not looking so different, now is it? George may have prided himself on Amal’s career and independence when they first met and started dating, but he’s apparently not enjoying being the less successful/intelligent one of the couple.

Meanwhile, Bruce Jenner is full swing into his transgender sex change, and reportedly hosted his first party dressed up as a full-fledged woman. Then, Jennifer Lopez and Cameron Diaz are reportedly considering babies, and Kate Gosselin is under investigation for child abuse [it took this long?]. And finally, Miley Cyrus reportedly had a ‘public meltdown’ over Taylor Swift, which I doubt. Miley might hold a grudge against Taylor Swift, but she’s too busy trying to corrupt America’s youth to pay that much attention to her once-frenemy.

What do you guys think? Will Amal Alamuddin and George Clooney actually get a divorce? Let us know your thoughts in the comments below.