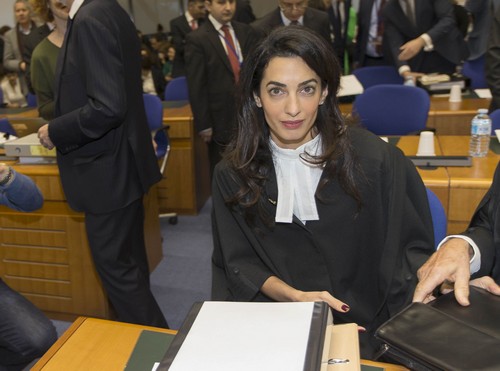 Rumors of a George Clooney and Amal Alamuddin divorce as a consequence of living separately due to career and baby goal pregnancy differences are being reported. George Clooney and Amal Alamuddin have only been married a few months, but are they living apart, essentially separated? Doesn’t bode well for their future, does it? Especially since rumors are that George wants to start a family and have a baby while Amal would have to sacrifice her lofty career ambitions for pregnancy and child rearing. According to a new report from Life & Style Magazine, George Clooney is filming a movie in Los Angeles while Amal Alamuddin has returned to her law career in London. However, Life & Style makes it sound as though the break is a good thing, claiming, “They’re really happy right now being on their own.”

Apparently, things were getting a little too tense because both George Clooney and Amal Alamuddin had different views about marriage and starting a family, and they’re glad that they have some time to cool off. Or the more realistic explanation: they’re both busy people that want to spend more time together, but they can’t because of the nature of their jobs and their careers. They can try their best to stay in touch, but eventually, their jobs WILL keep them apart – and that will lead to divorce.

Think about it from a practical viewpoint – how many couples survive long-distance marriages? And that’s not even factoring in George’s and Amal’s celebrity status, their respective relationship histories, and their nature of their jobs and careers. The two are barely going to spend much time together, especially since neither one of them is willing to sacrifice their career for a family. Amal’s not going to have a child anytime soon – even if George wants one – and both of them will continue working on their respective projects, even if they don’t see each other for months on end. Eventually separate living becomes legal separation and before you know it, they’ll both be linked to other people and ‘People’ will be confirming an ‘amicable’ divorce.

Don’t you guys agree? Or do you think that George and Amal will stand the test of time, even if they’re living apart? Let us know your thoughts in the comments below.