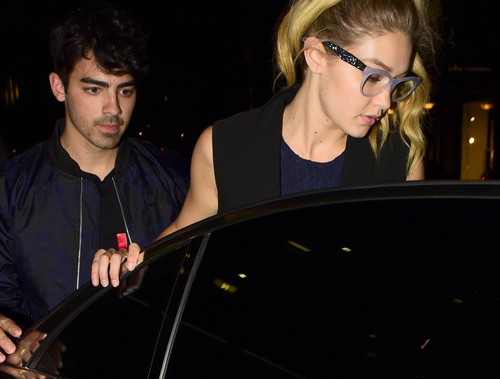 Gigi Hadid is one of Hollywood’s “It” girls right now, and there isn’t a single party that she isn’t invited to. But, the model and former RHOBH star has a tough time turning down a party, and her friends are worried that the young celebrity is doing too much and wearing herself thin. Gigi bounces from country to country, jet-setting all day and partying all night, and is reportedly going days without even sleeping!

According to the July 20 edition of OK! Magazine, Gigi Hadid’s pals fear that juggling her career, social life, nightlife, and new boyfriend Joe Jonas is going to take a toll on the young celeb, and she could break down from pure exhaustion at any moment. An insider close to Gigi dished to OK! Magazine, “Gigi doesn’t mind going days without sleep. She figures that since she works hard – she has earned the right to party all night and she takes full advantage of that philosophy. The other day she was so exhausted she could barely move. She is trying to compensate by drinking a ton of Red Bull, but her lack of sleep is making her irritable!”

It clearly is only a matter of time before Gigi Hadid crashes and burns, or turns to something a little more hardcore than Red Bull to help he stay awake – and her friends should probably step in before it gets to that level. Honestly, we can’t even say that we blame Gigi Hadid. If you were young and famous, could do whatever you wanted, and money is not an issue – would you want to waste your time sleeping? Obviously it’s not healthy, but how many people can really say that if they were in her position sleep would be a priority for them? Are Gigi’s friends being paranoid, or does she need an intervention? Let us know what you think in the comments below!