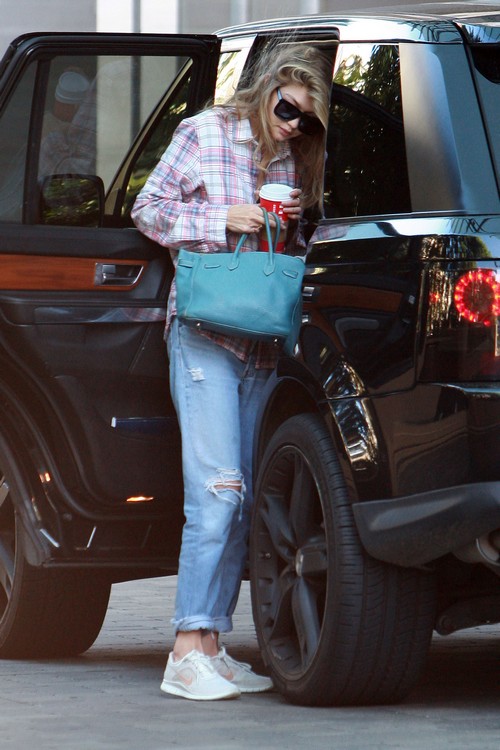 Gigi Hadid has moved on from Joe Jones and now the Victoria’s Secret model seems to be smitten with her new boyfriend Zayn Malik. Things are heating up between the former One Direction singer and his new model girlfriend.

Gigi and Zayn stepped out for their first official date on Tuesday, November 24 and the new couple were all over each other. Word is that Joe Jonas heard about the hookup and can’t believe Gigi has moved on so fast. In fact Gigi looks to be sleeping her way through young Hollywood even more quickly than Selena Gomez!

Gigi Hadid and Zayn Malik spent their first real date at The Nice Guy in West Hollywood with Gigi’s sister Bella Hadid. Of course the new couple was spotted on their fun date and apparently Zayn couldn’t keep his hands off Gigi.

The former One Direction singer was reportedly holding Hadid’s hand under the table and was holding on to her leg too. Zayn seemed pretty comfortable with the Victoria’s Secret model during dinner and you would never guess they just started hanging out together after the American Music Awards.

It has only been about three weeks since Gigi and Joe Jonas broke up. The former Disney star was pretty stunned to hear about Hadid dating Zayn Malik. Gigi and Joe reportedly split because of their busy work schedules.

We know how that goes though, nobody actually splits up because their tours are heading in opposite directions. Jonas and Hadid are supposedly still friends and have no bad blood between them. That may not be the case now that Gigi has already been spotting dating another man.

Of course Gigi Hadid denies the Zayn Malik romance rumors. Hadid insists that she and Malik are just good friends. That’s always how it starts though right? Weren’t Gwen and Blake just good friends too? It’s more likely that Gigi dragged Bella along as cover so the whole thing would look like friends going to a club and nothing more.

It might have been less obvious what was going on if Gigi and Zayn could have kept their hands off each other. Bella was an obvious third wheel while Gigi and Zayn looked like they couldn’t wait to get out of there and rip each others’ clothes off.

As a matter of fact, Gigi and Zayn tried to sneak out of the The Nice Guy together but were caught. Hadid left the celebrity hot spot by herself out the front door. Then Gigi was seen turning a corner and getting into a car with Zayn Malik. So much for the story about just being great friends.

Check out Gigi Hadid with bedhead after her night with Zayn Malik! FameFlynet