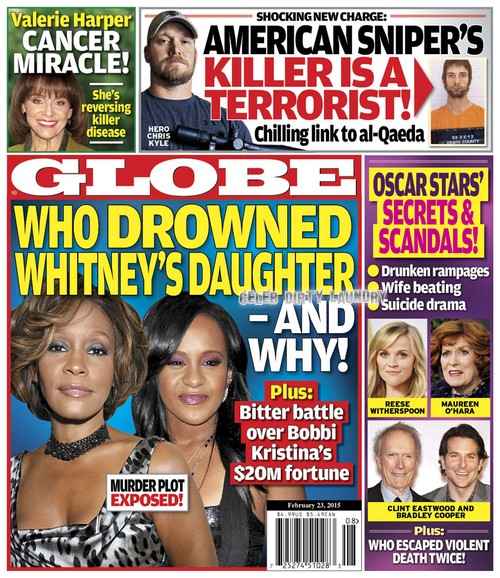 Bobbi Kristina Brown is still on life-support at a Georgia hospital after she was found face down in the bathtub of the home she shared with Nick Gordon. As details of Bobbi Kristina’s drowning continue to emerge it appears more and more likely that foul play was involved, and all signs are pointing to Bobbi’s “husband” Nick Gordon.

A witness, Max Lomas, informed police officers that Nick was cleaning up blood stains in the bathroom before the paramedics arrived – and he has since lawyered up. Lomas’s eye-witness account is just the tip of the iceberg though, police are also investigating some mysterious injuries they found on Bobbi Kristina which are not a result of drowning.

Our friends at GLOBE Magazine always report on the most important celebrity stories, so naturally the February 25th cover of GLOBE is dedicated to Bobbie Kristina’s drowning. This week’s cover story asks, “Who Drowned Whitney’s Daughter – And Why? Plus – Bitter Battle Over Kristina’s $20M Fortune! Murder Plot Exposed.” All signs seem to be pointing to Nick Gordon, and he could get a serious pay day if Bobbi’s family takes her off life support. But, if Nick is found criminally liable in Bobbi Kristina’s eventual and sadly inevitable death, then he can forget about any inheritance. Besides, Nick he is not actually legally married to Whitney Houston’s daughter, and according to Whitney Houston’s original will Bobbi’s inheritance is set to go to her grandmother Cissy Houston. Of course you can be 100% certain that if Bobbi dies there will be a battle over her $20 Million fortune.

In other celebrity news, the all new cover of GLOBE Magazine teases a in-depth story on the real American Sniper – Chris Kyle, who was tragically murdered at a gun range in Texas. Apparently GLOBE has discovered undeniable links between Chris Kyle’s killer and al-Qaeda.

As always GLOBE Magazine has inside stories on celebs that you can’t find anywhere else, the February 25th cover teases some juicy secrets about Oscar stars such as Reese Witherspoon, Clint Eastwood, and Bradley Cooper, and an expose on Valeria Harper’s battle with cancer.

We can’t wait to go pick up the latest edition of GLOBE Magazine so that we can get all the latest details on Bobbi Kristina’s tragic drowning – and who is responsible. Have you been following the story? Do you think foul play was involved, the police sure do. Let us know what you think in the comments below and don’t forget to check CDL later this week for the inside story.