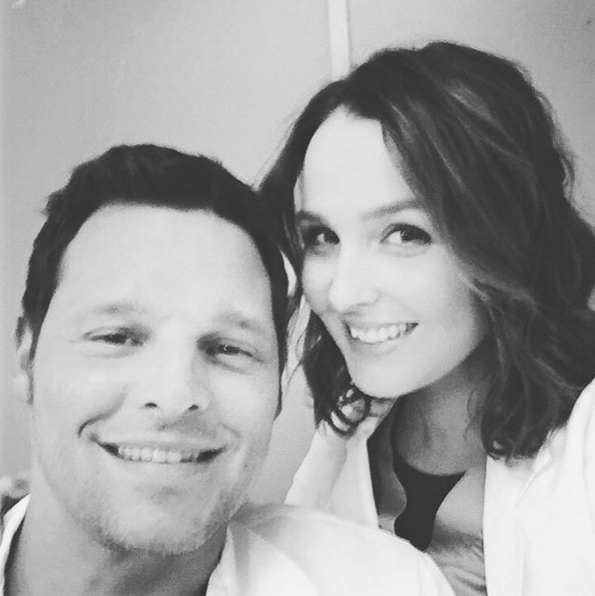 Tonight on ABC Grey’s Anatomy returns with a great all new Thursday November 19, season 12 fall finale titled “Things We Lost in the Fire.” On tonight’s episode, injured firefighters arrive at the hospital after battling a wildfire.

On the last episode, a high-stakes case was tackled by a team of doctors, and the atmosphere grew tense. Meanwhile, Bailey pressured Ben to evict their roommate; and Arizona enthusiastically re-entered the dating scene with a new wingman. Did you watch the last episode? If you missed it, we have a full and detailed recap right here for you.

On tonight’s episode as per the ABC synopsis, “injured firefighters arrive at the hospital after battling a wildfire. Meanwhile, Maggie has trouble maintaining just a professional relationship with Andrew at work; and Jo wants to know what Alex’s priorities are.”

This episode looks like it is going to be a great episode and you won’t want to miss it, so be sure to tune in for our live coverage of ABC’s “Grey’s Anatomy” Season 12 fall finale at 8 PM EST!

Bailey is dealing with her first disaster as Chief. Unfortunately four crews of firemen were caught up in a massive fire when the window blew back on them and had left them enclosed by fire. Yet the men had thankfully been rescued and all they needed was treatment.

So that’s where Bailey stepped in. Bailey had believed in her hospital and in the strength of her staff therefore she agreed to take on all forty injured firefighters. And wasn’t afraid to personally help out whenever she could.

However Bailey had overestimated. Especially with her staff. It seems she knew they had skill, but had completely forgotten about their sometimes lack in people skills. So while she had been hoping their first priority would be to treat their patients, she was instead hit with news about Owen and the new doctor Riggs.

The two didn’t like each other and at first it was fine because they had managed to keep their distance. But then the fire crisis happened and Owen’s mother’s boyfriend turned out to be one of the firefighters that had been brought in. So Owen tried to put his mother at ease by looking up the man’s file and that’s when he learned that Riggs had been in the middle of operating on someone technically close to him.

So Owen then tried to get Riggs removed from surgery. Only he didn’t have the power to pull rank and Maggie who was Riggs’s boss didn’t believe she should interfere with an ongoing surgery without cause. And thus Owen was left a loss.

For some reason he didn’t want to talk about why he hated Riggs but he appreciated the fact that Meredith began hating Riggs simply on his say so.

Although Jo ended up having her own issues with Meredith. Meredith tended to treat her as if she was less than a person. So Jo finally told Alex that he needed to say something to Meredith and she wounded up in a fight with Alex when he ended up choosing Meredith’s side over hers. Alex said Meredith had been going through a rough time and that’s why she was the way she was but Jo said Derek’s death didn’t give Meredith the right to be such a bitch to her.

So those began a fight they couldn’t quickly backtrack from and what Jo needed the most was to have someone to just talk to. But Stephanie hadn’t forgiven her and without either Stephanie or Alex – Jo took to crying in the supply room.

However there was certainly one shocker on tonight’s episode of “Grey’s Anatomy”. Riggs actually knew Owen’s mother and hugged the older woman when they saw each other again. And so Meredith asked Mrs. Hunt “how worried should she be about Owen” particularly with Riggs there.

And after Meredith heard the story, she refused to tell Amelia. Amelia though took Meredith’s secrecy personally as if Meredith felt it was none of Amelia’s business despite her relationship with Owen. So the two women did what was months in the making. They had a small shouting match about what they are to each other before it ended with Meredith kicking Amelia out and Amelia being all too glad to leave.

But at least their fight didn’t get physical. Owen and Riggs’s on the other hand did. Riggs had called Owen’s mother “Ma” and said the other was family to him so Owen responded that he wasn’t family after he had punched him to the ground.

So at that point, Bailey had to step in and investigate what was going on between the two doctors. And ultimately there were a few other issues that simply resolved themselves.

Jo and Stephanie made up. And expressing her frustrations out loud made Jo realize something, she knew she couldn’t stand being anyone else’s second choice. So that night she tried to end it with Alex and was caught by surprise when he proposed. With a ring and everything.

Therefore when the season picks up again in January, we’ll find out if she said yes or not, if April and Jackson will get back together, and why Owen never told anyone that he once had a sister?