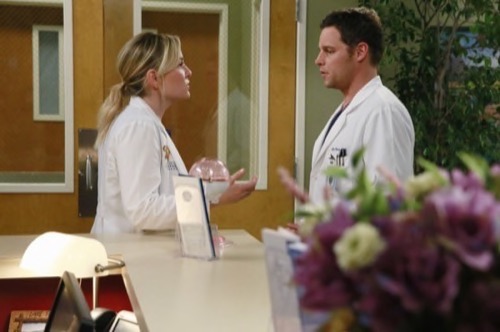 Tonight on ABC Grey’s Anatomy returns with a great all new Thursday April 16, season 11 episode 20 titled “One Flight Down,” and we have your weekly recap below. On tonight’s episode, a small plane crash occurs, triggering bad memories for Meredith [Ellen Pompeo] and Arizona [Jessica Capshaw] as injured victims are brought to the hospital. Meanwhile, tension between Owen [Kevin McKidd] and Amelia [Caterina Scorsone] creates an awkward work environment for Stephanie. [Jerrika Hinton]

On the last episode, upon realizing that Owen and Amelia had been seeing each other behind her back, Meredith came down hard on her sister-in-law causing Amelia to rethink things. Meanwhile, Catherine sprang into action when a man was brought into the hospital after his wife seeks revenge on his cheatings ways. Did you watch the last episode? If you missed it, we have a full and detailed recap right here for you.

On tonight’s episode as per the ABC synopsis, “a small plane crash in Seattle causes multiple casualties and brings back horrible memories for the doctors, especially Meredith and Arizona. Meanwhile, friction between Owen and Amelia makes for an uncomfortable working situation for Stephanie.”

This episode looks like it is going to be a great episode and you won’t want to miss it, so be sure to tune in for our live coverage of ABC’s “Grey’s Anatomy” Season 11 episode 20 at 9 PM EST!

On last week’s episode, Amelia had not only fought for her right to date whomever she liked but her main struggle with Meredith at the time was to get the other woman to back off on her relationship with Owen. Yet, now that she’s gotten what she wanted – what she does want? Because it surely it doesn’t seem like its Owen anymore.

Poor Owen! He doesn’t understand what’s going on with her and she can’t even respect him enough to speak with him. So that left him in charge of trying to break the ice and unfortunately nothing has worked for him so far. He’s been trying to talk to her and each time he’s managed to work up the nerve – she’d shut him down.

And eventually, after she kept on doing that, Owen finally decided “ok”. As in what was the point of chasing someone when they could dismiss him so easily.

However, in spite of wanting to spend time is separate areas of the hospital; Owen was forced into close contact with all hospital personnel after a plane had crashed. All the rookies and interns raced to the scene hoping to catch a juicy case when they heard about the plane but the more seasoned doctors, when they weren’t being professionals, were worried about their friends.

See, some of them knew what the plane crash was going to do to Meredith and Arizona. It was going to make two women, great women, relive something so horrible that’s happened in their lives. And that’s something no one could have wished for.

Both of these women are the survivors of a horrific plane crash that killed two of their friends and family. Arizona had lost her leg in that crash and Meredith almost watched everyone she loved die around her. So right now they’re not in the correct mindset to solely focus on their patients. And yet they only have each other to talk to.

Recently, they’ve become the only survivors still remaining at the hospital. Derrick was supposed to hurry back from Washington but his wife Meredith hasn’t heard from him in a while and so she has that worry about on top of her PTSD. Because this latest crash is bringing serious flashbacks.

Arizona was constantly on edge and Meredith let her situation follow her into the OR. Thankfully, Maggie helped saved her patient but neither Meredith or the patient Sam were the better for it.

Meredith was still concerned about her husband and Sam, who had just go on the best first date of his life, was losing out on a chance to fall in love.

Apparently, Sam had met Kate and they immediately hit it off. And by that, he was saying he was going to marry that girl and she was calling him her future. However none of that matter anymore. Since the plane crash happened, Kate woke up after her own surgery with no memory of what happened. Including her wonderful first date with Sam.

So Stephanie found all of that to be simply too much. Here, there was a young couple that fell in love at first sight and the female counterpart couldn’t even remember first sight. Hence, Stephanie decided to do something about that.

She attempted to recreate the couple’s initial spark and though Amelia kept catching her at pushing their patient too far – Stephanie refused to give up on Kate and Sam. And surprisingly what she did ended up paying off.

Kate did come to remember Sam on her own and that’s all because Stephanie wanted to give them a chance.

And Arizona finally found out the truth about her leg on tonight’s episode. Alex confessed to being the one that removed it. And as for Meredith, she never heard from her husband but she was later visited by the police in the late hours.