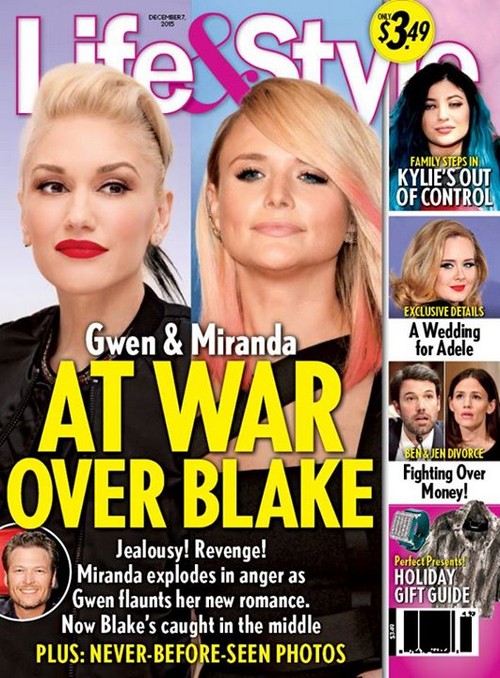 Blake and Miranda’s break-up and divorce earlier in 2015 was messy, general consensus is that both Blake and Miranda were unfaithful. Lambert is furious that Blake has already moved on, and with Gwen Stefani at that!

This week’s edition of Life & Style Magazine reveals that the battle between Gwen Stefani and Miranda Lambert over Blake Shelton is JUST getting started. This week’s cover of L&S Magazine features a photo of the two women, the headlines screams, “Gwen & Miranda At War Over Blake! Jealousy! Revenge!

Miranda Explodes In Anger As Gwen Flaunts Her New Romance – Blake Caught In The Middle.” The tabloid also teases to have “never before seen photos” of the hot new couple.

We’re not sure what exactly it is that Miranda Lambert is more upset about – the fact that her ex-husband moved on and found love before she did. Or possibly the rumors that he was cheating on Miranda behind her back with Gwen Stefani all along.

There is a very popular theory that the two Voice coaches were hooking up last season when Blake and Miranda were still married, but they waited until after their divorces to go public with their relationship. Regardless, there is reportedly some bad blood between Gwen Stefani and Miranda Lambert – and nobody is surprised.

The question is, what is Blake Shelton going to do about his girlfriend and ex-wife’s drama? Well, most likely absolutely nothing. Life & Style also includes some interviews from people who have known Blake Shelton since he was a little boy – and according to his close pals and friends, Shelton is the most “down to earth” guy they have ever met. So, it sounds like drama is the last thing on his mind.

And, Blake Shelton was devastated when his marriage to Miranda Lambert went sour, she broke his heart – the odds of them reconciling are slim to none, no matter how much trouble Miranda Lambert causes with Gwen.

A woman named Carol from Blake’s hometown dished to Life & Style, “He said, ‘I really thought that she was the one who’d be holding my hand the day I died.’ He thought she was his forever. Blake didn’t want the marriage to break up.”

So, is there bad blood between Gwen Stefani and Miranda Lambert? Absolutely! But, as long as Gwen plays her cards right she has nothing to worry about – because Blake Shelton is not trying to get his heart stomped on again by his ex-wife Miranda any time soon.

Gwen Stefani is spotted at a studio on November 24, 2015 in Burbank, California. Missing from the outing was Gwen’s new boyfriend Blake Shelton who she started dating after appearing together on ‘The Voice.’ FameFlynet