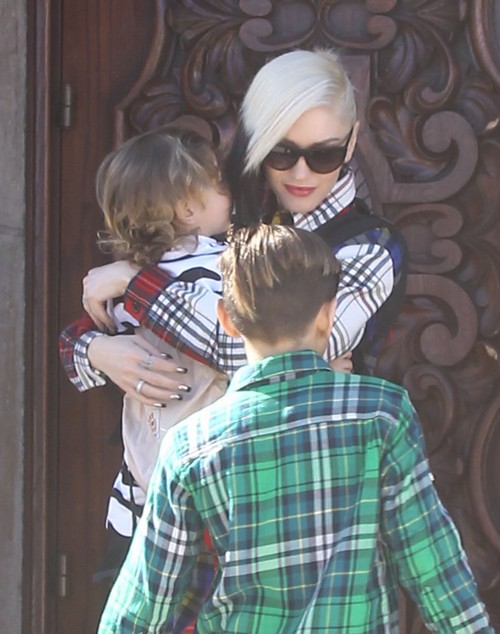 Gwen Stefani and Blake Shelton are incredibly happy together and the No Doubt singer wants ex-husband Gavin Rossdale to know it. Gwen and Blake were seen getting lunch together in Studio City on Thursday, December 17 and Gwen had her son Apollo in tow.

Things are serious between the new The Voice couple and Gwen is taking every opportunity to rub it in to Gavin that Blake is making her happier than the Bush singer ever could.

Gwen and Blake are very committed to each other and aren’t hiding their love from the world. Stefani is very protective of her three sons so it’s was a huge deal to take Apollo out for lunch with Shelton. The happy couple were seen eating at Loteria Grill in Studio City with Gwen’s 2-year old in tow. Gwen was seen carrying the Gavin Rossdale clone as they entered the restaurant.

Later in the day, Stefani was spotted shopping for Blake Shelton at a country western clothing store. It looks like the clothes designing singer is using Christmas as an excuse to step up Blake’s style. Some have questioned the love connection between Blake and Gwen because she is a style icon and Blake is obviously not too interested in the latest styles. That can all change though and Gwen seems to enjoy her love interest turned fashion project.

Gwen Stefani and Blake Shelton sparked up a romance while serving together as coaches on season 9 of The Voice. Stefani filed for divorce from Gavin Rossdale just weeks after Shelton announced his split from Miranda Lambert. The timing makes it hard to believe there wasn’t a romance brewing prior to the double divorce news.

Shelton and Stefani seem to have real love for each other though. Now that the hit NBC singing competition has concluded for the season,Gwen and Blake are still going strong. The Voice coaches have already met each other’s parents and are even reportedly talking about marriage.

Gwen and Blake got so serious so soon after splitting from their respective marriages that it’s not surprising if Miranda Lambert and Gavin Rossdale are a little bitter. There’s nothing Gavin can do about Gwen bringing her kids around Blake but there’s no doubt that the Bush singer isn’t happy about it.