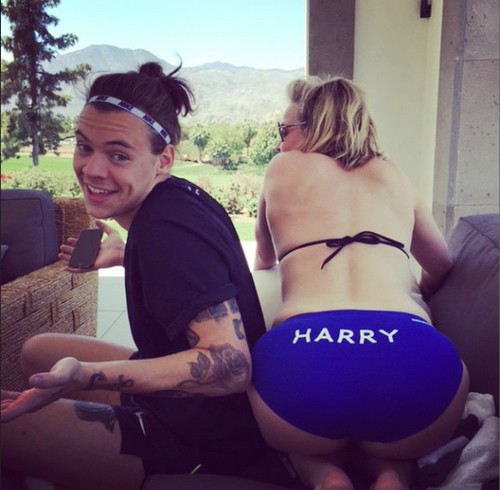 See, Harry Styles might be significantly younger than Chelsea Handler, but that doesn’t mean that he’s any less of a party animal. We’ve already seen that Harry likes to hang out with older women, so this fits right up his alley, no? Plus, Harry Styles ‘hanging out’ with an older woman is almost always code for hooking up with older woman.

Chelsea Handler might not exactly be his ‘type’, but one always has exceptions to a rule, right? It’s actually interesting because the rumors about Harry and this ‘mystery blonde’ first started when Harry posted a picture to Instagram, where he was pointing to a blonde woman wearing underwear that clearly said ‘Harry’ on it. Of course, One Direction and Harry Styles fans freaked out and wondered if this blonde was his new girlfriend, and most of them expressed disappointment when they realized it was just Chelsea Handler.

Even then, I don’t think Harry and Chelsea are ‘just friends’, or if they are, they’ve done a remarkable job of making it seem like there’s another dynamic between them. Or, you know, they could just be being playful…

What do you guys think about Harry Styles and Chelsea Handler hanging out and making Instagram photos together? Do you think they’re hooking up, or are they just friends who forget where the lines are? Let us know your thoughts on Harry Styles’ new girlfriend and non-ridiculous love life in the world…

Yay or nay? Let us know your thoughts in the comments below.