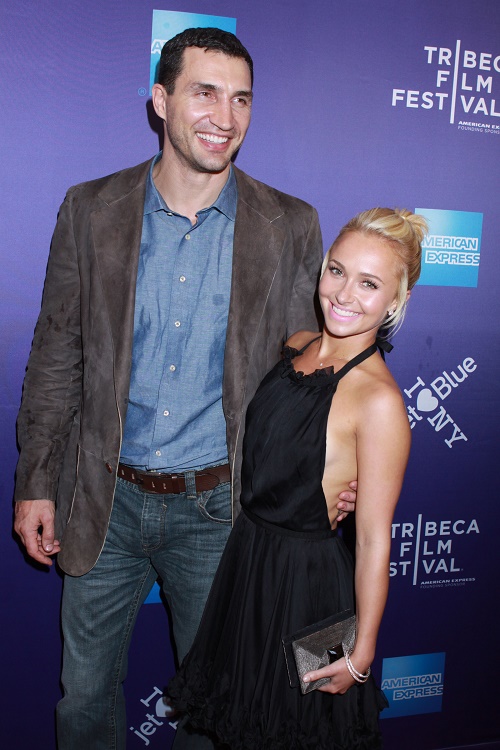 Hayden Panettiere just gave birth to her first child with boyfriend Wladimir Klitschko in December 2014, but she is already trying to get pregnant with baby number two! After nine months of humiliating baby bump photos and the media mocking the Nashville actress’s size and even comparing her to a whale – Hayden gave birth to her first daughter Kaya. Despite the hard pregnancy, Hayden is reportedly willing to do it all over again for her boyfriend Wladimir.

The April 20th edition of OK! Magazine reveals, “She is barely out of maternity pants but Hayden Panettiere is thinking about getting pregnant again! Sources say that her fiancé Wladimir Klitschko, who at 39 is 14 years older than the Nashville star – can’t wait to have more kids.” OK! Magazine’s insider dished, “He loves being a dad and wants to try again ASAP. Hayden is just finding her footing as a mom, but she wants a big family so nobody would be shocked if they announced a second pregnancy by this summer.”

Hayden’s first pregnancy was no walk in the park, and she even confessed in interviews how difficult it was carrying around that huge baby bump with her tiny frame. But, her fiancé Wladimir is nearly 40 years old, and if she plans to have a boatload of babies with him then she should probably not take too big of a break in between births or else her future husband could be changing diapers in his 50’s. The Nashville writers wrote Hayden’s first pregnancy in to the show’s current storyline. But, anyone that is familiar with Hayden’s character Juliette knows how much of a diva she is – and writing a second pregnancy for the country music singer in to the show would be a stretch.

Do you think Hayden Panettiere and Wladimir Klitschko will announce a second pregnancy by this summer? Or should they wait a few months and give Hayden time to adjust to being a mom? If she does get pregnant again, do you think the Nashville writers will work it in to another storyline? Let us know what you think in the comments below!