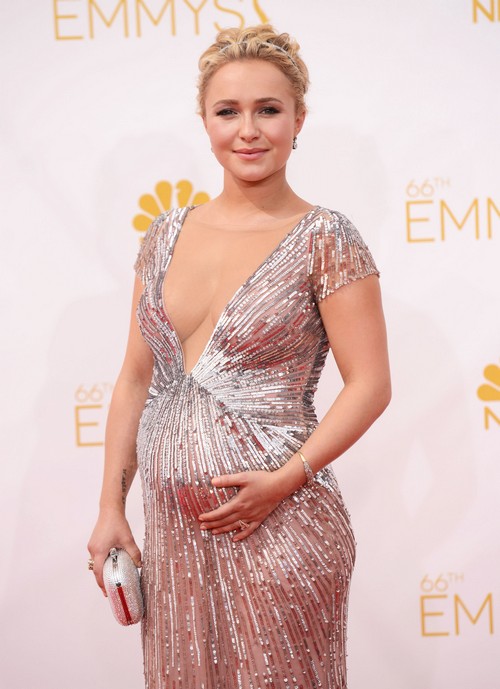 Nashville star Hayden Panettiere is now eight months pregnant, and looks as if she could give birth any minute. The tiny actress donned a bikini last month while on vacation in Hawaii, and the internet is still buzzing about her massive baby bump. Panettiere is 8 months pregnant with her fiancé, World Heavyweight Boxing Champion Wladimir Klitschko’s first child, although the couple are already starting a family together – they have not even set a wedding date. Rumors are out that Hayden and Wladimir may even split rather than marry.

According to the December 7th edition of GLOBE Magazine, “Hayden, who plays Juliette Barnes on ABC’s musical drama and has had her real-life pregnancy written in to the story, reveals she’s not going to swap vows with Klitschko until after she’s gotten rid of her baby weight.” On a recent Ellen appearance Hayden revealed, “I’ll tell you one thing for sure, I am not walking down the aisle forty pounds heavier than usual with a huge pregnant belly stitched in. Not happening.”

While it seems totally logical that Hayden doesn’t want to be eight months pregnant on her wedding day, rumors are running rampant that her massive baby bump is not the only reason that she and Wladimir haven’t began planning their wedding or even set a date. Multiple sources are reporting that the couple have been at odds for most of Hayden’s pregnancy, and their friends are doubting they will ever actually say their “I Do’s.”

Do you blame Hayden Panettiere for wanting to wait until after the baby is born to marry her fiancé Wladimir Klitschko, or do you think they should have tried to say their “I Do’s” before the baby came? Do you believe the rumors that the couple is splitting up, and there isn’t going to be a wedding? Let us know what you think in the comments below.