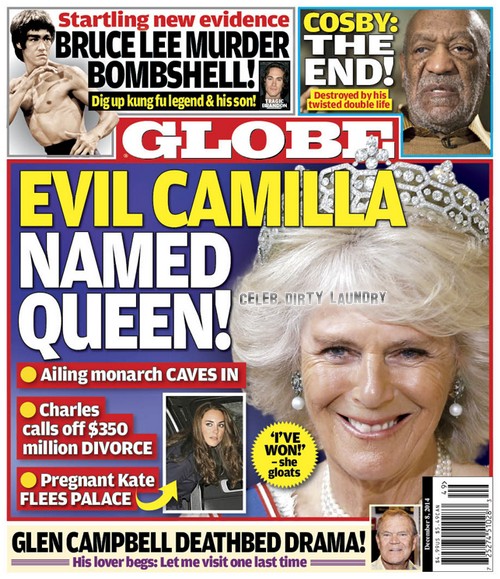 As pregnant Kate Middleton reportedly flees the palace, Camilla Parker-Bowles is throwing a wild victory party in England right now, despite protests from thousands of the Royal Family’s supporters – Queen Elizabeth has decided to surrender her crown to Prince Charles and his evil second wife. It’s no secret that Queen Elizabeth wanted Prince William and his wife Kate Middleton to take the royal reigns. But, considering William’s wishy-washy attitude and indecisiveness over whether he wanted to be a family man or a King, combined with the Queen’s deteriorating health, Elizabeth had no choice but to give in and allow Prince Charles and Camilla to take over.

The December 7th edition of GLOBE Magazine announces, “Evil Camilla Named Queen! Ailing monarch caves in, Charles calls off $350 Million divorce, Pregnant Kate flees palace.” GLOBE Magazine always gets the inside scoop on what is really going down at the royal palace – the magazine has been teasing for months that Camilla was threatening to divorce Charles and take him for everything he and his family were worth if she didn’t get the throne he had promised her years ago – back when the pair were cheating on Princess Diana. The Queen may be royalty – but a $350 Million divorce could put a dent in her finances, and that s no doubt one of the many reasons Queen Elizabeth finally gave in and revealed that she was passing the throne on to Charles and Camilla.

We can’t say that we blame Kate Middleton fleeing the palace and getting the hell out of dodge. It’s public knowledge that Camilla Parker-Bowles despises the Duchess of Cambridge, and once she is officially named Queen she will make Prince William’s wife’s life a living hell.

As always GLOBE gets the hard-hitting facts on the week’s top stories – regardless of how contoversial they are, this week’s cover teases an interesting article on Bill Cosby’s “Twisted Double Life.” The December 7th edition of GLOBE also will expose a shocking “Bruce Lee Murder Bomb-Shell” and new details on Glenn Campbell’s death-bed drama.

So, how do you feel about Prince Charles and Camilla Parker-Bowles being named the next King and Queen of England instead of Prince William and Kate Middeton? Did Queen Elizabeth really have a choice, considering the expensive divorce, her deteriorating health, and Prince William’s indecisiveness? How do you think Camilla will treat Kate Middleton once she takes the throne? Let us know what you think in the comments below, and check CDL later this week, we will be picking up the new GLOBE and dishing all the new Royal family gossip!