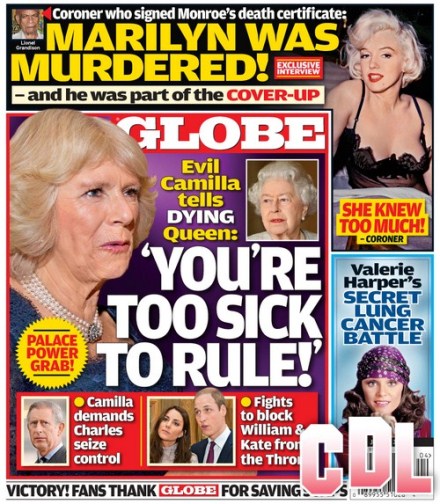 Camilla Parker-Bowles has demanded that her hapless husband, Prince Charles, seize control from his ailing mom, Queen Elizabeth. GLOBE reports this incipient palace coup on the cover of this week’s issue, the January 28th print edition.  Camilla fears that since Kate Middleton has become pregnant, the Queen will keep her promise and make Prince William King, bypassing unpopular and incompetent Prince Charles.  Once Queen Elizabeth makes the decision to promote William over his dad official, Camilla’s dreams of being Queen of England will be dashed.

Camilla knows the only way around the Queen’s plan is to prey upon Elizabeth’s poor health and use it as an excuse for Charles to ascend the throne while he is still officially next in line.  GLOBE sources reveal that heartless Camilla told the Queen “You’re too sick to rule” as part of her plan to undermine Elizabeth’s authority and block William and Kate from the throne.  Camilla assumes that by labeling the aged Queen as sickly and spurring on Charles she can wrest royal power from those to whom it rightfully belongs.

But Camilla has not counted on a robust response from Prince William in defense of his grandmother.  The Duchess of Cornwall assumes that Kate’s pregnancy has distracted her husband and that this is the optimal time for her to launch her evil plot.  We at Celeb Dirty Laundry disagree – William is a hard-nosed pragmatist who with Kate’s help will fight his step-mother and beguiled father to defend the Queen from this attempted palace coup.

In this week’s issue we will learn how much fans appreciate GLOBE’s intrepid efforts to save the soaps!  Networks have a nasty habit of cancelling classic TV shows in favor of cheap talk shows and moronic reality TV series.  Celeb Dirty Laundry along with GLOBE recognize that change is not always for the better – in fact when it comes to entertainment it is often for the worse!

GLOBE’s cover has a shocking headline indicating that JFK ‘s sex partner, Marilyn Monroe, was certainly murdered to keep her quiet.  It seems that the coroner who signed Marilyn’s death certificate was part of the cover-up.  Is there nothing politicians and governments won’t do to protect themselves from the truth?  It seems that regardless of the ideals that leaders espouse when they are trying to gain power once attain it they try to hold onto it at all costs.

This week we expect GLOBE’s print edition to reveal secrets that will have us glued to our chair as we read.  Between an exclusive interview with details of the conspiracy to hide the truth about Marilyn Monroe’s murder, and insider facts about Camilla’s palace coup, GLOBE once again knocks the competition for my reading out cold.  No other magazine gets inside a story and tells its readers exactly what is happening the way GLOBE does.