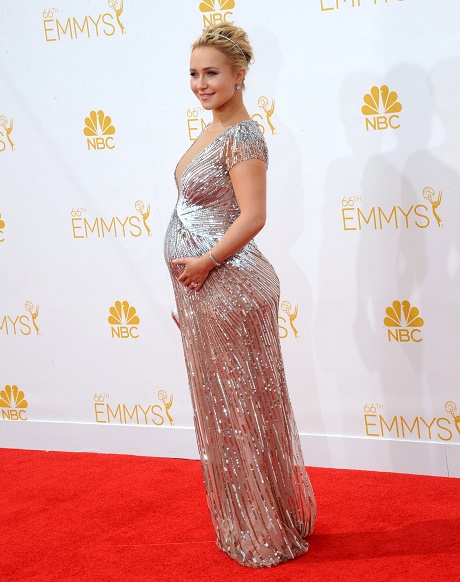 Hayden Panettiere is very pregnant, approximately eight months, with Wladimir Klitschko’s baby — but is there trouble in paradise? Panettiere was recently photographed on the beach, showing off her ginormous baby bump, and appearing ridiculously uncomfortable and miserable. Then again – can’t say that we blame her. Rumor has it that Hayden’s massive size may not be the only reason she appeared unhappy, sources are reporting that she and Wladimir’s relationship is on the rocks, and they are on the verge of calling off their wedding.

According to the latest edition of OK! Magazine, “The very pregnant Nashville star and her fiancé have been at each other’s throats for months. The conflict has been caused in part by Hayden’s physical discomfort. She’s rally ballooned, her hormones are raging, and Wladimir is just tired of her nagging him.” OK! Magazine’s inside source goes on to reveal, “At this rate their wedding might never actually happen.”

We’re going to have to give Hayden the benefit of the doubt on this one, the once tiny actress looked like a beach whale on the beach the last time she was seen out and about, a super cute whale – but nonetheless a whale. She has to be miserable, and considering she and Wladimir’s relationship has been pretty solid over the years, their differences will most likely blow over once their baby is born. If not, then it looks like Hayden is going to be experiencing life as a single mom.

Do you think that Hayden and Wladimir will be able to work out their differences once the baby is born? Or are they going to break up before they even make it down the aisle at their wedding? Can you picture Hayden Panettiere as a single mom? Let us know what you think in the comments below!