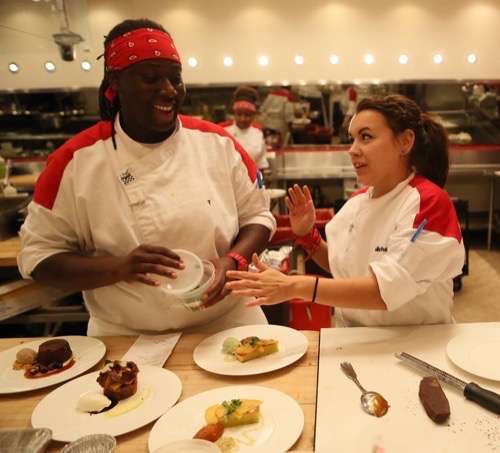 On the last episode, following last week’s dramatic dinner service, the men pulled ahead by grating, shredding and melting their way to a victory in the week’s cheesy team challenge. The team that cooked up the most impressive enchiladas, croquettes, lasagna, cordon bleu and calzones would clinch the win and be rewarded a thrilling ocean adventure away from the daily duties of HELL’S KITCHEN. Later, the star-studded dinner service began and the division between the strong and weak contestants continued to elevate emotions. Did you watch the last episode? If you missed it, we have a full and detailed recap right here for you.

On tonight’s episode as per the NBC synopsis, “following last week’s dinner service, during which both teams struggled, the remaining 13 contestants compete in a special lunch service honoring two unique charitable organizations consisting of active and retired firefighters of Los Angeles. The first team to complete a speedy and successful lunch service for 60 hungry firemen will win an afternoon exploring the great outdoors of Malibu, CA, while the losing team will be left behind with a fowl punishment. Then, as dinner service begins, tensions emerge, causing Chef Ramsay to kick out multiple contestants in the middle of service. Find out who will be the in the Top 12 and who will go home”

Has the Blue team’s luck finally turned around on tonight’s all new episode of “Hell’s Kitchen”? Well, to be honest there’s really nowhere else for them to go than up. It’s not like they can lower Chef Ramsay opinion of them when actually their starting more from the bottom now than they were in the beginning.

Last week both teams were struggling in the kitchen and by struggle I mean they continued to barely scrape along. In fact besides the first couple of weeks both teams have been sore points for Chef Ramsay. And to be fair say he’s not impressed with either of them. Yet at the end of the last week’s service it was the Red team that had to put up someone for elimination.

So it was the Red team that got rid of who they believed to be their weakest link. But then Sarah did something kind of funny after the ladies later returned to their dorm. You see she apparently asked for cooking tips/essentials from one of the other girls. And that made more than a few question how much she really knew about cooking.

Quick answer to that question is that sometimes she’s on top of her game and at other times she’s her worst enemy.

Which she ended up proving during tonight’s challenge. Subsequently, both teams were asked to serve a lunch service for retired fireman. And the first team to finish would be the winner.

But what kept the Red team from winning this particular challenge are all the problems they ran into. Namely Sarah and T. Surprisingly T needed more than a few tries to fry chicken. And Sarah basically ran around a chicken with its head cut off.

That’s why later it was only apt that the Red team’s punishment required them having to prepare all the chicken that was going to be needed for tonight’s dinner service.

It was demeaning work, and while the guys were off drinking wine with Ramsay, Megan snapped. She told her team they needed to get their act together and frustrated them yet impressed Ramsay. Ramsay told her right before dinner service that he thinks she has what it takes to lead the Red team. So that’s what Megan wants to do for tonight’s dinner service.

She wants to take control and yet appetizers were stalled because of the risotto. Someone had apparently forgotten to season it and Megan, self-appointed leader, didn’t bother testing it out herself.

As for the blue team, they had both Nick and Brendan dragging them down. Nick was the first to disappoint with his undercooked scallops and it seems that leaving Brendan on fish wasn’t the overall smartest move. Not when he either overcooked or undercooked.

Almost as if he didn’t know what the middle ground was!

So eventually Ramsay kicked out Nick and Brendan. And then he turned Josh as well. Josh couldn’t cook the wellington properly and he was caught wasting Ramsay’s time.

Hence, when all was said and done, the women finished off a nearly perfect dinner service thanks in large part to Meghan who rode/repeatedly insulted them. And the guys were told they had to put up two for elimination. However backstage there was an argument no one saw coming.

Brendan was nominated and suddenly out of nowhere Milly just went for him. He made the fact Brendan was an executive chef before all of this a class issue. And by that I meant he accused the white boy of not getting his job because of actual skill.

Then, at elimination, the rest was up to Ramsay and he chose to send Brendan home over Nick. According to the world famous chef, he found Brendan to be book smart but not practical in the kitchen.