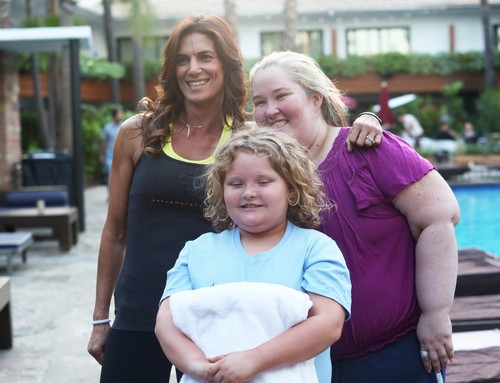 Did Mama June and Sugar Bear score a new reality TV gig on Season 4 of Marriage Boot Camp? TLC cancelled Here Comes Honey Boo Boo and dropped Mama June like a bad habit after it was discovered that she was dating a known child molester. It was bad enough that Mama June had her boyfriend Mark McDaniel around her children, but even more concerning after it was revealed that one of the children he went to prison for molesting was one of her own daughters!

TLC won’t touch Mama June and her family with a ten foot pole, and quickly severed all ties to Honey Boo Boo. However, it looks like WE TV might not have any qualms about adding June and her on-again, off-again boyfriend Sugar Bear to the Season 4 cast of Marriage Boot Camp. Right now Season 3 is currently under way, and Kendra Wilkinson’s marriage to Hank Baskett is currently after he heated on her with a transsexual is reeling in ratings. But, the network is already searching for some relationship-challenged D-List celebs to fill up their next cast. And, Mama June and Sugar Bear definitely meet the criteria.

According to a new report from The Hollywood Gossip, Mama June and Sugar Bear are rumored to be joined by The Bachelor’s Catherine Giudice and Sean Lowe, and Love & Hip-Hop’s Benzino and Althea. Just last week Mama June told the tabloids that Sugar Bear was cheating on her with gay male prostitutes – so at this point the couple’s drama would definitely be front and center on the next season of Marriage Boot Camp. And, frankly we might have to actually watch the show just to see Catherine and Sean interact with Mama June and Sugar Bear. Seriously, how hilarious would that be?

Do you watch Marriage Boot Camp? Do you think that Mama June and Sugar Bear would be a good addition to the cast? Is WE TV playing with fire casting them after the child molestation scandal? Let us know what you think in the comments below!

‘Here Comes Honey Boo Boo’ stars Alana Thompson and Mama June Shannon work out at a gym in Hollywood, California on April 11, 2015. June seems committed to her fitness goal of losing 100 pounds, enlisting the help of knockout personal trainer Natasha Kufa. Alana was enthusiastic as always, running on the treadmill and rooting her mom on. FameFlynet