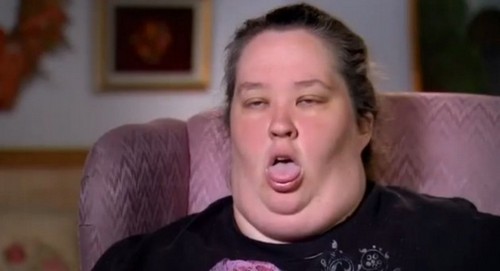 As Celeb Dirty Laundry reported yesterday, Honey Boo Boo Star, Mama June is rumored to be dating a child molester and this has led TLC to cancel the reality TV show ‘Here Comes Honey Boo Boo.’ Mama June Shannon admitted to Mark McDaniel being an ex-boyfriend, but denied currently dating him,  Though she denies it, evidence says otherwise.  June posted this on her Facebook Thursday night, “I promise my kids r #1 priority over anything else and I would never put them in danger period over this or anything else. They r my life this is my past. I left him 10 yrs ago for it and I wouldn’t go back.”  At the end of the day she should not be friends with someone who molested a child!  Mark McDaniel served 10 years in prison for forcing one of Mama June’s relatives who was 8 at the time, to perform illegal activities.  The victim has now spoken out.  TMZ reports the 8-year-old girl who was molested by Mama June’s new beau was her own daughter Anna.  Now that is sick! What is Mama June smoking?

Anna Cardwell who’s known as Chickadee on the show is now 20 and married with a child of her own.  At first she believed her mom when told she was not dating the man who molested her. Since then Anna has gotten a lot more info and feels betrayed her Mother is not only dating a child molester, but the person who molested her.

Anna wants it to be known that  she’s the victim to make what her mom is doing look even more horrible. She feels her relationship with her mom is now destroyed.  The only way June will be able to see her granddaughter is if McDaniel isn’t around. TLC did reach out to Anna today to offer her counseling.

Since these allegations have started, TLC has had to make some difficult decisions.  On Friday the series ‘Here Comes Honey Boo Boo’ was officially canceled.  I along with majority of the world am glad this show is over. No wonder Sugar Bear was cheating on Mama June.

General views of the home of Mark McDaniel in Decatur, Georgia on October 25, 2014. There is a large sign on the door that reads ‘Private Property, No Trepass, No Comment’, we are pretty sure thats suppose to be ‘Trespass’. Mark has been rumored to be the on-again boyfriend of Mama June from ‘Here Comes Honey Boo Boo’. Mark a convicted child molester is the reason why TLC canceled the hit TV show and it is now coming out that one of his victims was Mama June’s oldest daughter Anna ‘Chickdee’ Shannon. When a reporter tried to knock on the door a lady came outside and stood by the mailbox enjoying her cigarette. FameFlynet